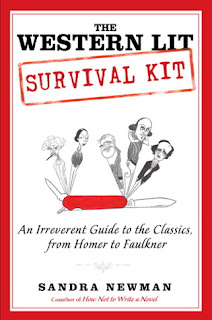 The Western Lit Survival Kit: an Irreverent Guide to the Classics, from Homer to Faulkner, by Sandra Newman

I'm a sucker for guides to great literature, and also Sandra Newman is hilarious.  I didn't quite mean to actually read this book instead of Dracula (which I am reading, and it's good, but less easy to carry around), but it's so funny that I zipped right through it.  Almost every page had something that gave me the giggles and made me look around for someone to collar and read a bit aloud to.

This guide to the Western Canon is what you should give to your friend who has to learn something about the classics and doesn't want to.  I would give it to my husband if he suddenly found himself in that situation.  Or you can give it to your literary friend with a sense of humor.  Newman is pretty caustic much of the time, and reverent never.  Like Western lit itself, things are not always squeaky-clean.

A sample bit, on Balzac: "As a writer, Balzac started as a hack, producing nine abysmal pulp novels under pseudonyms.  He also started various businesses, all of them failures, but never lost faith that he would someday be rich and famous.  Then, one day, he had an idea for a series of novels which would give an encyclopedic account of human society.  Thrilled, he ran to his sister's house to announce, "I'm about to become a genius!"  Some of our readers may have brothers like this and feel a little weary at hearing it again.  However, as never ever happens with your brother, Balzac was totally right."


I really am reading Dracula, though--I've been in the mood to work on my challenges some more after a month or so off.  I got a pile of Greek plays from the public library.  And, inspired by the Classics Club check-in post, I finally finished my list, which I don't think I can realistically plan on finishing but what the heck.  Today I picked out some books from it for summer reading, and I'm hoping to get a lot of good books in once school is over (next week, yay!).
150+ Challenge 52 books