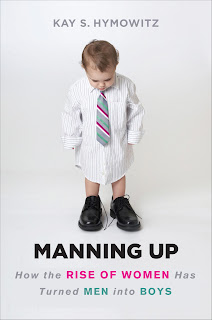 Manning Up: How the Rise of Women Has Turned Men Into Boys, by Kay Hymowitz

I really liked Kay Hymowitz's last book on marriage in America, so I grabbed this new book as soon as I saw it and read it right away.  Hymowitz correlates a lot of current statistics and societal trends for her thesis that men in modern America haven't got a clear life plan and aren't all that happy about it.

Some of Hymowitz's data:  women are now a majority on college campuses worldwide (and would be more so, if the colleges weren't quietly letting male students in with lower scores because people don't want to attend colleges with a strong imbalance).  In cities, the younger women out-earn their brothers, even when they choose less remunerative types of jobs.  Popular culture portrays men as overgrown children, not too bright and mostly interested in beer, pizza, fart jokes, and hot women--and they're constantly told that they're not needed as husbands or fathers, since women can manage quite well on their own, thank you.  But this isn't necessarily resulting in better lives for men, or women, in the long run; while gender equality is great, it may not be mandatory to tell men that they're useless slobs in order to get there.

We've had a huge societal shift, so that it's common for people to take years and years to prepare for careers and adulthood, but we haven't adjusted yet.  When does adulthood really begin and what is the marker that defines it?  Hymowitz is sympathetic to men who are given confusing and contradictory messages about what adult life should look like and how men should act.  It's a pretty interesting analysis of current society, with some good insights.
150+ Challenge 52 books