Journey from the Land of No 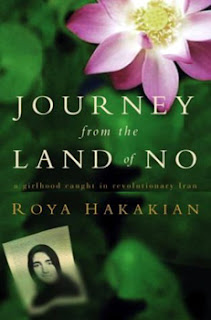 Journey from the Land of No: a Girlhood Caught in Revolutionary Iran, by Roya Hakakian

This memoir of the Iranian revolution particularly caught my eye because the author is Jewish.  Roya Hakakian grew up as part of the ancient and closely-knit community of Persian Jews, which dated back over 2000 years.  Her whole book is filled with love for her homeland, now lost.

Like many Iranians, Roya was at first thrilled by the revolution in 1979, as life seemed to become freer, full of exciting possibilities.  Even though her older brothers had had to flee to America, her father could not imagine leaving.  But as the Ayatollah Khomeini's regime became more and more restrictive, Roya's life became more difficult, and before long she was seeing old friends crushed under the revolution they had longed for.

I found this to be a fascinating account of the Iranian revolution from a  different viewpoint than one normally gets.  Hakakian is an eloquent writer and writes vividly about experiences that are difficult for her to remember.
150+ Challenge 52 books