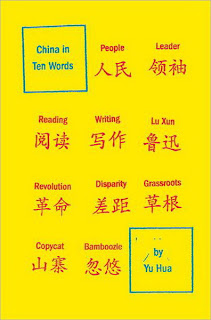 I've really been looking forward to reading this one, and it did not disappoint.  Yu Hua grew up during the Cultural Revolution in China, under Mao, and in ten chapters he tells about ten different ideas and what they have meant to him and to Chinese culture.  Each chapter's idea takes a logical step along a path, and also moves the story forward in time.

Some of Hua's stories are very funny; I could just see him and his friends as young boys getting up to mischief.  Others are really horrifying--sometimes for the same reason.  Altogether it's a great portrait of life in China, mostly during Mao's regime, but taking us right up to the present day.  I'd recommend this title highly.

I love the cover design, by the way.  The words look like rubber stamps, just a little off-kilter.

Lately I've been trying to get through my giant pile of library books, often by the simple expedient of skimming a book and deciding not to read it after all.  I still have quite a way to go, but the shelf is looking quite a big roomier now.
150+ Challenge 52 books