Week 9: The Woman in White 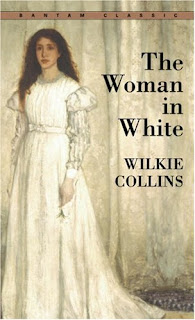 Week 9: The Woman in White, by Wilkie Collins

I thought I would pick this up again because I had forgotten most of it. I enjoyed reading it pretty well, and I found it a bit ironic that the plot actually moves faster in this than in my other current book, The Swan Thieves.

This counts as a monthly classic too!

Week 8: The schools we need and why we don't have them

Week 8: The schools we need and why we don't have them, by E. D. Hirsch

It took me forever to read this book by the Cultural Literacy guy, E. D. Hirsch. His main theme here is that the US needs a common core curriculum in all public schools, and that anyone looking to further "progressive" goals like social justice and equality is going to have to adopt educational philosophies that are usually considered conservative.

I do agree with quite a few of his ideas--he's got me convinced that we should have a common curriculum in the US (good luck getting that one passed), and that the American insistence that we are unique and can't learn from other countries' successes is wrong. But I disagree with his position that nearly all children will learn at approximately the same pace if you give them solid, slow-and-steady instruction. In my experience, some kids are just not going to learn to read by age 6--and as long as they're getting plenty of oral instruction and aren't made to hate the whole idea of reading, that will work out just fine.

Hirsch wrote this book in about 1999. Since then, we've seen a lot more of what he was protesting in public schools. It doesn't look like he'll get his way anytime soon.
Posted by Jean at 4:47 PM No comments:

The History of the Medieval World

The History of the Medieval World: from the Conversion of Constantine to the First Crusade, by Susan Wise Bauer. W. W. Norton & Company (February 22, 2010), 768 pages.

This series concentrates on the history of nations: rulers, wars, and religion. Bauer connects them together and shows how they influenced one another. In particular, she concentrates on the twining of religion and political ambition--how rulers used religious identity to consolidate power, and how religious authorities exerted political influence. For the most part, you will not read about how common people lived; this is a "big picture" project that will give you a solid foundation for further study.

Bauer covers most parts of the world for which there is history available. This means that there is quite a lot of information about China and Byzantium, but only a couple of chapters on native American civilizations; there just isn't much material to work with there and we know very little about rulers and events during this period. Likewise, there is almost nothing about Africa except where Islamic empires were established, because there is so little written history about the peoples of Africa during this time. I think some smaller groups could have used more time, but the book can only hold so much.

Explaining 800 years or so of world history is not a simple task, but Bauer draws coherent threads of narrative through centuries of events with insight and humor, as in this observation about life in the large city of Kannauj in north India:

"...all three kings coveted it. Already the city had passed back and forth between the Pala and Pratihara kings, much to the dismay of the citizens, who had to flee for cover whenever a new army stormed through the gates. It was extremely uncomfortable to live in a symbol of dominance." (p. 437)

As the book progresses and more history becomes available, it's quite interesting to watch new kingdoms pop into existence in places like Russia, Scandinavia, and Ireland. They follow similar patterns all over the world. As new leaders gather power, they need legitimacy: a history and equal recognition by other kingdoms. A good history can be made up--just ask Geoffrey of Monmouth--but recognition as an equal from other rulers is hard to come by, and often requires force. All these nations constantly jostle for power and land; one lesson to take from the book is that the story of the world is the story of war, and the imperialistic impulse is part of human nature. A medieval kingdom that didn't expand would shrink.

Medieval history and literature is a favorite subject of mine, so it was a bit dismaying to realize how ignorant I am about nearly all of it. I particularly appreciated the chapters on Korean history, which is probably not very well-known to most people outside Korea--certainly not to me. The history of the Chinese empires and the great influence they exercised over so much of the east is fascinating. The many ever-changing kingdoms of India are terribly complex and difficult to follow, and I admire the effort that must have gone into making them comprehensible. However, I don't know enough about any of these societies to be able to judge the accuracy of the information.

I am not sure that I would end the medieval period at the First Crusade, just before 1200 AD; I felt that was a bit early. Bauer makes a case for the "marriage of spiritual gain and political power" starting a new era after centuries of tug-of-war between secular and religious rulers, and I see her point (p. 666). I may have to wait for the next volume to be able to form a full opinion about her judgment in ending there, but after all, the line had to be somewhere. At the moment, I'm wondering how she'll get the next 800+ years, with all their new nations and developments, into just two books. So far Bauer has done an excellent job with this enormous project, and I would certainly recommend this volume to anyone wishing to study medieval history.

The Holy Sinner by Thomas Mann

Mann's novel is based on the medieval Gregorius legends. I did not look Gregorius up carefully enough beforehand, so I didn't realize that the legends are sort of what V. C. Andrews would have come up with, had she been a medieval storyteller. The legend is itself based on the story of Oedipus and is meant to show the infinite goodness and forgiveness of God. No matter how awful your sins may be, if you repent you can be forgiven--though your penance may involve living on a rock and turning into a hedgehog for a while.

Mann writes as if he is a medieval chronicler, which can be a little tiring and repetitive, but it's suited to the story. Every so often, characters fall into rhymed verse as they describe some dramatic incident. 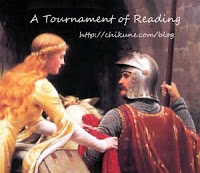 I have never read Thomas Mann before, and always kind of meant to, so when my brother Tom suggested this title for the historical fiction category I thought I'd give it a try. Yeah, thanks a lot Tom. It was better written than most popular historical fiction, though, and I didn't have the problem where the protagonist is really a modern person who will rebel and live as she pleases while saving the ignorant masses. I plan on trying The Magic Mountain next, but I don't think I'll read this one again.
Posted by Jean at 12:50 PM 4 comments:

This is the second novel in the Company series, and thanks so much to the Bookshelves of Doom blog for telling me about Kage Baker! The series setup is that Dr. Zeus, Inc., based in the 24th century, has agents working throughout history. Sky Coyote centers on Joseph, whose last role was a Spanish priest of the Inquisition--now he's playing Coyote to the Chumash of Point Conception in 1700, just before the Spanish show up to take over. The first Company book is In the Garden of Iden, so start there.

Kage Baker turns out to have been a Central Coast resident; she lived in Pismo Beach. So why didn't we all know about her?? Baker just passed away a couple of weeks ago, and she will be missed.

Does My Head Look Big in This? by Randa Abdel-Fattah

I read about this YA title in another 52 weeks blog--thanks Amira!--and thought it sounded like a fun read. Amal is an Australian teenager at a preppy private school, and she's also a faithful Muslim--the only one at the school. Over break, she decides to start wearing the hijab full-time. How she copes with friends, boys, and misconceptions about Muslims makes for a fun and pretty realistic story, though some of the minor characters are a bit cardboardy. I think most girls would enjoy the book.

Week 6: The Mysterious Benedict Society and the Prisoner's Dilemma

The Mysterious Benedict Society and the prisoner's dilemma, by Trenton Lee Stewart

Our favorite clever foursome is back in the third Mysterious Benedict Society book. This one is just about as much fun and hard to put down as the other two. My 9-year-old daughter loves these books and this has been at our house for a month or so, so it's high time I picked it up.

I also got this great sewing reference book: A to Z of Sewing. The A to Z series has wonderful photography and directions. This is a general guide to elements of sewing like seams, gathering, ruffles, zippers, and so on. Much of it was familiar, but it's nice to have techniques I've learned from many different sources collected in 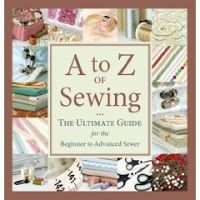 one spot, and I also learned several new things. This will be a very good book to have around as the girls learn to sew, and I'd recommend it for a beginner. Sewing patterns from the big companies generally illustrate a quick-and-dirty style that works, but that does not give a superior result--so when you learn the better techniques described here, your work will be much better. It takes a little more time to do things like French seams, but the results are worth it.

This memoir is hard to put down.  It's by one of the group of nine black students who first entered Little Rock's Central High school to end segregation in Arkansas.  The book is not very long; Roberts talks about his early life and family, how he decided to be one of the Nine and what it was like that year.  (This was in 1957-58, and all of the area high schools were actually closed for the next year in an attempt to stop desegregation.  Roberts finished high school in Los Angeles.)

As a Gen-X California girl, I don't know a lot about the South and legal segregation--it probably doesn't help that US history is my worst subject.  So while I knew the general outlines, the details were mostly news to me.  I particularly enjoyed Roberts' descriptions of his family life and community; he had some excellent teachers and mentors who helped him on his way.

This title has led me to Warriors Don't Cry, by Melba Pattillo Beals, another member of the Little Rock Nine.  I'm looking forward to reading her book as well.