The Birds is quite a long comedy, so it took me a few days to read.  It was written several years after The Peace; Athens has recovered nicely from the last episode of the Peloponnesian War and is now eagerly preparing for a new one--which is going to end in disaster for the Athenians, but let's not worry about that right now.  The Birds does not directly address the war, which is unusual for Aristophanes, but I certainly get the impression that he was responding to the general atmosphere with his story. 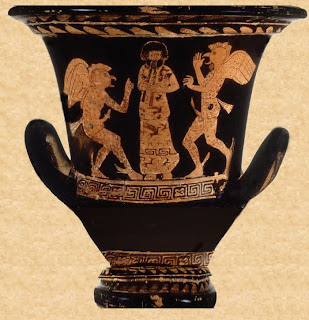 Pisthetaerus and his buddy are wandering around the countryside near Athens.  They're tired of life in the city, where people argue about law all the time and you have to pay your debts, so they're looking for Tereus (a king changed to a hoopoe) in hopes that he'll direct them to some city where life is good and the living is easy.  Once they find the kingdom of birds, Pisthetaerus has a bright idea; he convinces them all that they should take over the sky.  It's their natural domain, they pre-date the Olympian gods, and this way they can rule over men and starve out the Olympians (just as the Athenians had recently done to the island of Melos).

The birds love this idea.  A chorus forms of birds from all over the place, and everyone establishes the great bird city of Cloudcuckooland--so now you know where that term comes from!  Multitudes of characters show up to vex Pisthetaerus with Athenian habits and are thrown out.  Then the gods themselves arrive; first Iris, then Prometheus, who gives Pisthetaerus good advice on how to deal with Zeus, and finally an envoy to make terms of peace (that was quite a funny bit, since Hercules is once of the committee.  First he plans to beat everyone up, but the promise of a feast soon gets him on the birds' side).  Pisthetaerus ends up in charge of the whole place, with a nice goddess wife to boot.

Just as The Peace was something of a special-effects extravaganza with a flying dung beetle, The Birds must have been a costuming spectacle.  A very large cast half composed of varying birds, each with their own plumage, plus half a dozen gods, must have been some fun for the audience.  It's not exactly our taste in comedy, so I can't say that I find these plays very funny, but they are interesting for the understanding you get of Athenian society.

I suppose the plays also mark an important cultural development for democracy; I don't know of any other instances from this long ago of the idea that it could be OK to publicly criticize or make fun of your own society's rulers.  The things Aristophanes says about important Athenians--at a state religious ceremony!--would probably have gotten him killed in almost any other society at that time, but Athenians were supposed to grin and bear it.  That eventually grew into our own principle of free speech.
Greek classics