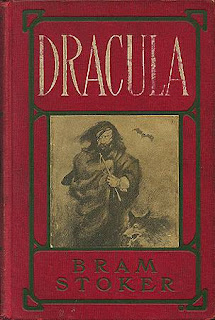 When I put Dracula on my list of classics to read this year, I was kind of excited to finally get around to reading such a famous story.  I am clueless enough that I had no idea who Van Helsing was supposed to be, much less Mina Harker, who doesn't get a movie named after her.  After carefully examining the movie poster just now, I much prefer the literary Dr. Van Helsing.   I may have to watch the movie though, because it looks terrible, and I kind of like terrible movies.   (Although it makes me very sad that Kate Beckinsale, who started off adorable and fun to watch and a favorite of mine, has turned into a generic pseudo-Victoria Beckham.)

Anyway.  The novel.  It's all documentary!  The whole book is comprised of journal entries and letters, meant to give the story that authentically-reported atmosphere that was so popular in the Victorian era.  There is a sort of ensemble cast of men, plus two lovely, pure, and virtuous women--one traditional and one more a New-Woman type.

I had no idea what to expect from the story besides a vampire or so and some Transylvanian scenery.  A good half of the action takes place in London, though, because the whole plot is that Count Dracula is planning an invasion of England, it being full of nice juicy people to snarf on.   So we have a book full of contrasts: Eastern Europe (dark, foresty, sparsely populated with canny peasants who know better than to get vampire-snarfed) vs. England (sunny, open, full of innocent victims), primitive/modern, animal/technology, not to mention all the pale/ruddy comparisons. There is plenty of fodder for undergraduate English papers.

I really had fun with this story, much more than I expected to.  It's great Victorian adventure-Gothic stuff!
classics League of Extraordinary Gentlemen Challenge Victorian