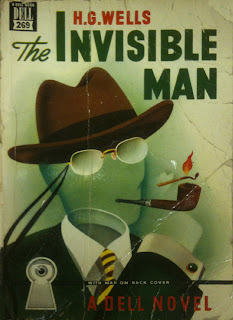 I've read most of Wells' short SF novels--even The Food of the Gods--but I missed The Invisible Man.  Griffin, a brilliant physicist and an albino (that's important), discovers a way to make himself completely invisible!  He thinks it's going to be great.  He'll be able to find out anything, take anything he likes.  The entire story is about how wrong he is; being invisible is terrible.  Griffin is an utter outcast from humanity.  His hold on sanity was probably not too strong in the first place, and invisibility makes him completely selfish and full of rage.  He is more of an angry ghost than anything else, and all he can do is terrify people.