A Tale of Time City 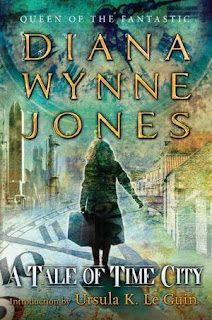 A Tale of Time City, by Diana Wynne Jones

Last Saturday I went to the bookstore and found the new editions of Fire & Hemlock, Dosgbody, and Tale of Time City that have just come out.  My copies of those books are quite old and fragile, so I got new ones, yay!    Then, of course, I had to read at least one of them.

I do love this story.  It's a funny one, but serious too.  Vivian is living in 1939 and is evacuating to the country, when she is kidnapped by two boys in a case of mistaken identity.  She winds up in Time City, a separate tiny world that keeps tabs on history and makes sure it goes how it ought to, but the City itself is coming to the end of its lifetime, and nobody really knows what to do about that.

These new covers are very nice; this is by far the nicest cover Time City has ever had, though that's not saying much really.  Up to now the covers have always been terrible.

Now, if only I could get new copies of The Ogre Downstairs and Spellcoats--my copies of those are very elderly and absolutely falling apart.
150+ Challenge 52 books