By Jean - May 07, 2012
I really finished the last 14 pages of this several days ago, but I've been lazy about blogging lately.  There is a pile of four other books here on my desk too. 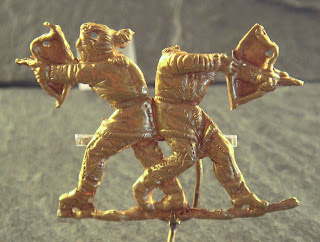 Book IV is mostly about the Scythians, the semi-nomadic people (of Iranian descent apparently) living in what is now mostly Ukraine.  There is quite a lot of geography here--the land, the rivers, the various peoples and their customs are all described carefully.  Then there's a little digression on world geography, which is important because Herodotus passes on a story he does not really quite believe in himself, about some Phoenicians who traveled all the way around Africa (which is called Libya here):


The Phoenicians sailed from the Arabian gulf into the southern ocean, and every autumn put in at some convenient spot on the Libyan coast, sowed a patch of ground, and waited for next year's harvest. Then, having got in their grain, they put to sea again, and after two full years rounded the Pillars of Heracles in the course of the third, and returned to Egypt. These men made a statement which I do not myself believe, though others may, to the effect that as they sailed on a westerly course round the southern end of Libya, they had the sun on their right - to northward of them. This is how Libya was first discovered by sea.

Of course, the bit Herodotus doesn't buy is the very information that shows the story to be more reliable than he thinks; the sun would have been to the north just as the sailors said.


But back to the Scythians--Darius, as you might expect, planned to conquer them and make them part of the Persian Empire.  This story takes up most of the rest of the book, all about alliances (or refusals to become allies), strategies, and tricks used on both sides.  But Darius eventually won.

Then it's on to Libya (Africa), and the story of Greek colonies on the North African coast.  More geography and rivers and tribes!  Luckily my book has lots of very nice maps or it would all be so much muddle to get through.  Herodotus always throws in interesting tidbits and stories, so it's pretty fun.


I sure am going slowly, though.  I enjoy it--it's just that the book is enormous and not easy to understand, so it doesn't quite mesh with my busy-mommy lifestyle.  I think I will try to get something shorter in this month too.

Hey!  This is my 333rd post!  Is that a lucky number or anything?  It ought to be.
Greek classics