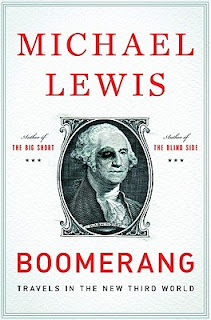 Boomerang: Travels in the New Third World, by Michael Lewis


I could hardly put this book down! In this collection of articles originally written for Vanity Fair, Michael Lewis tackles certain aspects of the global financial meltdown, especially how it developed and played out in selected countries. It's a discouraging topic, but he's a witty writer and manages to make the enormous muddle somewhat clear as well. His focus is on how the sudden expansion in investment and credit affected certain countries: "Icelanders wanted to stop fishing and become investment bankers. The Greeks wanted to turn their country into a piñata stuffed with cash and allow as many citizens as possible to take a whack at it. The Germans wanted to be even more German; the Irish wanted to stop being Irish." And Americans wanted to buy really big houses they couldn't actually afford!

Each section in a different country is just fascinating, with general commentary and specific stories. The cumulative effect is to make you wonder what on earth we were all thinking. What gave us the idea that everyone could be rich without doing anything for it except to buy a big house? Why did Icelandic young men think that they were natural banking geniuses? Why do the Greeks continually evade taxes and then riot when the country goes broke? Who thought that they could build zillions of expensive houses in Ireland when there was no one to live in them, and why did German bankers buy bad debt?

The final section concentrates on the most stubbornly overspending and delusional state in the USA--my very own California home, where we take enormous natural wealth and mismanage it into bankruptcy. A day with former governor Arnold Schwarzenegger leads to a day in San Jose city government, where everyone is broke because most of the budget goes to pensions, and that leads to the spot where the bubble finally popped for good. The city of Vallejo declared bankruptcy and now has hardly any city workers at all. Vallejo's present could well be the future for many California cities, but no one wants to admit that, and the problems seem intractable.

Amazing stuff, and funny as well (thankfully, because if you really stop to think, the information is too depressing to read).  Lewis is not always kind, but it's a topic that needs blunt statements.  We all need to get way better at understanding numbers, and meanwhile we should stop buying stuff we can't afford to pay for.