A few short stories in Urdu 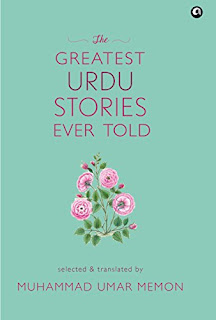 Back in August, I got hold of a book of Urdu short stories translated into English.  It's a large book, so I wanted to read just the women authors for WIT, and that would still be a good amount.  August got away from me, and I only read one or two stories back then, but I've continued reading them since.  I've now finished all the short stories in the book that were written by women (luckily for me, there are short biographies in an appendix, since I could only tell from the name about half the time).  I'll just highlight a couple:

"The Wagon," by Khalida Asghar, is a hallucinatory, apocalyptic story.  The narrator meets three strange men who are watching the evening sky and point out that it has become red.  No one had noticed until they said so, but the sky is now strangely red.  Then a smell arrives, so offensive and sickening that it causes real pain -- but only once it's pointed out.  And finally, a mysterious wagon, which may be the source of the stench, is seen driving around every evening.  But where did the men go?

"Do You Suppose It's the East Wind?" by Altaf Fatima, is another strange story, featuring memories of a neighbor boy -- and not because he was a romantic interest, just because he was a bit odd and needy, and the cool breeze has started to blow.  I almost wonder if the narrator is supposed to be sliding into dementia.

It was neat to read these short stories, and I wish there had been more women-authored pieces in the collection, but they all look pretty good.