I am Nujood, Age 10 and Divorced 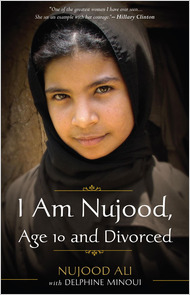 I am Nujood, Age 10 and Divorced, by Nujood Ali with Delphine Minoui

This has been on my wishlist for a couple of years now, but inexplicably, none of the local libraries bought a copy until recently.  I found it on the New Books shelf at work yesterday and promptly took it home.

Nujood Ali was an ordinary little girl living with her poverty-stricken Yemeni family until she became the victim of a common crime--her father sold her, at age 10, as a bride to an acquaintance in his 30s.  The next several months were a nightmare, but Nujood waited for her chance, gathered up her courage, and went to the city courthouse where she had heard someone could help her.  She told the judge she wanted a divorce, and so set off a media storm that helped other girls come forward to ask for divorces.

Child brides are not at all uncommon in Yemen. The age of consent was 15 until a couple of years ago, and even so, about half of Yemeni brides were underage.  No young girl had ever come forward and asked for a divorce before, and the legal system had pretty much ignored the whole thing.

This is not an easy story to read, and although it's told by a young girl, it's not a children's book.  Go ahead and read it if at all possible!
150+ Challenge 52 books