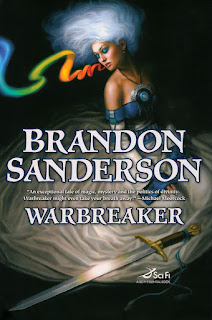 I've read the first 12 chapters of Brandon Sanderson's Warbreaker, and here are the discussion questions so far.  Don't bother with this post if you haven't read the book--skip right on to some other post, or meditate on the works of Plato, or something.

I'm enjoying the book quite a lot so far.  I just started it Saturday and read the whole assigned section that day.  I've had the paperback on my TBR pile for a long time--I think the goofy cover kind of put me off.  The concept of a magic system that works through color and sound is a little weird, but if anyone can pull it off Sanderson can.  It does make for a difficult cover art concept, though.

1. All right, let's start easy - how are you liking the book so far? We've been introduced to a lot of characters and started several stories now. Any in particular catch your attention? Anything intrigue you?

I want more Vasher as soon as possible.  I'm hoping Lightsong will do something!  Siri's story is the most interesting so far, but Vivienna is going to be exciting.

2. The Returned are all treated as Gods, but at least one of those Gods doesn't believe in his own divinity, despite seeing potential visions. Do you think the Returned will prove to be divine? How do you feel about the religion built up around them?

I think the religion is going to turn out to be very wrong in some ways, and right in some unexpected way that I don't know yet.  The Returned won't be divine, but they'll be something interesting!

3. The God King didn't turn out to be the way he's presented and thought of in this world. Any ideas on what his role will be in this story?

I bet the poor guy (if you can use that term for him) is miserable.  How evil is he, or is he just trapped?  How sane is he?  Knowing Sanderson, he'll be a bit of all of those.

4. The title - Warbreaker - what do you think it might refer to?