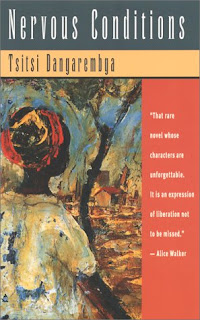 The Classics Club led me to this semi-autobiographical novel by Tsitsi Dangarembga.  Tambudzai tells the story of her early life in the later days of colonial Rhodesia, hooking you in with the rather shocking opening statement, "I was not sorry when my brother died."  The story of why this is so is the story of Tambu's childhood (try putting the book down after that opening!).  At 14, Tambu leaves her homestead out in the country and goes to live at the mission with her uncle so that she can go to school; her world is wider, but far more complex and difficult to understand.

On the surface, the story reads like a memoir, but themes recur and develop as Tambu observes the lives of her closest female relatives.  Dangarembga explores the far-reaching effects of colonialism and what it means to rebel against authority (familial and colonial).  Tambu's cousin Nyasha is the most vocally rebellious and the most sensitive victim of the forces around her, while Tambu herself is still trying to make sense of the world and figure out what she thinks.

It's a wonderful book and I wound up reading it much sooner than I had meant to.  Don't miss this one!  Dangarembga has actually worked much more in film than in literature; this was her first novel and it was quite some time before she wrote another, but a sequel in Tambudzai's story, The Book of Not, was published in 2004.  I would very much like to read it, but it's not as easy to find as Nervous Conditions, so I will have to wait a little while.


Here's the story of how I came across Nervous Conditions: when I started building my list for the Classics Club project, I wanted to find books from all over the world to read.  I wasn't sure where to go for African works, besides one or two of the best-known titles, but I found out that in 2002 a list of "Africa's 100 Best Books of the 20th Century" was published as a group project by leading academics and publishers.  The list is not ranked, but the committee selected 12 'best books.'  I figure that's as good a place to start as any, so I put those 12 titles on my list.  I'll try to read at least 6 of them; that way if I can't find one or two it's not a problem.  Once I had my little list together I looked around to see if any titles were easily available to me, and I took 3 home from work for summer reading.
African literature classics