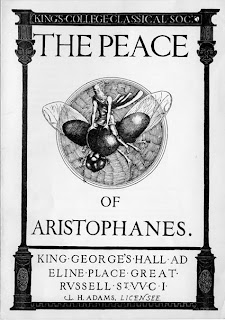 The Peace, by Aristophanes

It's time for some summer fun with Aristophanes!  I am reading three plays in a Loeb edition I found at my friendly neighborhood public library.  I have always wanted to own Loeb editions because they are so cool, even though I can't actually read Greek or Latin.

Almost nothing is really known about Aristophanes, so scholars have made a hobby out of extracting information from his plays.  This is a little tricky since it's hard to know what is a joke and what isn't, but they are pretty sure that he went bald early (the portrait is a total lie).  Aristophanes survived the Peloponnesian War and probably served once on the city council, and that's about all anyone can really figure out.

The Peace is not one of the comedies that I had heard of before.  It was staged in 421 BC, just days before the Peace of Nicias, which was supposed to end the Peloponnesian War.  The play combines silly antics with a genuine longing for peace and recriminations against the Greek habit of war. 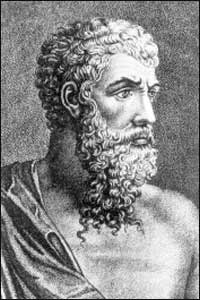 Trygaeus is an ordinary farmer with a plan--he has fetched a giant dung beetle from Mount Etna and is going to ride it up to heaven to beg the gods for peace!  (This must have been quite the stage spectacle, and of course the characters comment on the machinery and stage hands needed.)  But when he arrives, Trygaeus finds Hermes just locking the place up; everyone else is already gone.  The gods have given up trying to get the Greeks to do anything besides kill each other, so they're giving the place to War, who is moving in.  War has already buried Peace, but has gone out to look for a new set of Greek generals to fight with.


Trygaeus seizes his chance and calls citizens from every part of Greece to help him get Peace out.  Lots of them show up, but they aren't all very helpful.  They pull and tug and heave, and Peace is brought forth, along with her two maidens Harvest and Mayfair. Hermes explains why Peace had left Greece; first, greedy profiteers had driven her out, but then the Greeks had all voted against her:  "She came, unbidden, with a chest of treaties, And thrice you blackballed her in full assembly."  They apologize to Peace and leave for home, taking Harvest and Mayfair with them.  Trygaeus marries Harvest, gives Mayfair to the Athenian leaders, and sacrifices to Peace--while giving a beggar a good beating!


Next I'll be reading The Birds and The Frogs.
Greek classics