The Brides of Rollrock Island 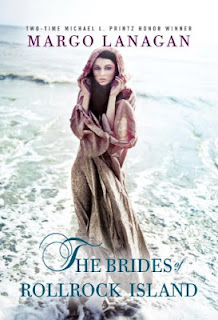 The Brides of Rollrock Island, by Margo Lanagan

I've been waiting for this book for months, ever since Eva (I'm pretty sure) mentioned it.

Rollrock Island is a small, isolated island inhabited by fishermen and their families.  It's prosaic enough until the witch Missakaella learns to use an old magic--the skill of drawing a woman out of a seal.  A sea-wife is beautiful and enchanting, but the price may be too high.

I can't say any more or it will ruin the story, but--selkies!  I can't resist a selkie story.   This one is very strange and quite well-written, very worth reading.  Lanagan really draws out the mystery and only gives you a few clues at a time, so that it takes a while to figure out what's going on.  She also gives you Missakaella's point of view, which fills everything out nicely.

The island setting is not identified in time or place, but it's most like a west Irish island, or perhaps a northern Scottish one, in the first half of the 20th century.  The story takes place over a couple of generations, and I'd guess that it's roughly 1890-1930 or so.  It's very much like a YA version of one of my favorite movies, The Secret of Roan Inish.  Similar background and setting, with lots more relationship drama.

The US cover, pictured here, is pretty good I think.  It looks like a "pretty girl in a ballgown" cover but if you look closer, the fabric is supposed to be a sealskin.  I'm less impressed with the UK cover, which features a much more ballgown-y dress and a girl who appears to be dead, or at least extremely uncomfortable.
YA lit