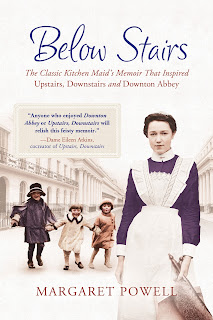 Below Stairs, by Margaret Powell

This is a really famous memoir. I guess there aren't that many memoirs that talk about what it was really like to be a servant back in the old days, and Powell is very honest about it.

Margaret Powell grew up very poor, in a large family, and though she was highly intelligent and wished to further her education and become a teacher, it just wasn't feasible for her family.  So she went to work at 14, and after a couple of years doing laundry and various jobs, she decided to enter into service as a kitchen maid.  This put her at the bottom of the servant hierarchy, but it was also a position that had great opportunity for advancement, because a kitchen maid could move up to be a cook.

Being a kitchen maid is not much fun, but it's sure interesting to read about.  After 3 years as a maid, Powell advertised herself as a cook (though really she had more confidence than skill).  She spent several years doing that too.  It's a great memoir, so don't miss it.
history