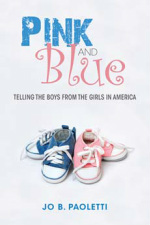 Pink and Blue: Telling the Boys from the Girls in America, by Jo. B. Paoletti

This is a fascinating book!  I thought it was great.  Paoletti did a whole lot of research into how children's clothing has changed over the past 200 years.  It's exactly my kind of thing.

Did you know that once upon a time (not that long ago), pink wasn't just for girls and blue didn't mean boys?  There weren't that many rules, and when there were rules, they varied and pink was frequently considered to be the more masculine color, while blue was more "delicate and dainty."  More often, pink was for brunettes and blue was for blondes (remember Laura Ingalls' resentment over always having to wear pink while Mary got blue?), regardless of sex.

But there's a lot more to children's clothing than pink and blue.  Babies weren't really regarded as having gender; ideally you shouldn't be able to tell at all from the clothing.  Boys and girls alike wore long dresses which were shortened as they learned to walk.  They played with the same toys; boys had baby dolls as a matter of course. They were dressed alike, in frocks, until age 6 or 7 when boys were breeched.  As the 19th century ended and the 20th began, the age at which boys were breeched got younger and younger, until dresses were only for infants (but those dresses lasted right through to the 1950s).  An excerpt:


For many parents in the early 1900s, gender identity was tied uncomfortably closely to sexuality, which they believed did not fully emerge until adolescence...For these parents, infants and toddlers were asexual beings, and the only proper way to dress them was in clothing that concealed their sex.  This was not only about adult perceptions of little children; according to this view, the children themselves should not be made aware of these differences until they were old enough to begin to understand them....

..."modern," enlightened early twentieth-century parents came to believe that gender identity was the product of nurture and that gendered clothing should encourage its development, not signify its attainment, as had been the case for generations.  (pp. 76-77)

Not only did all children wear dresses, but all trims were considered to be equally appropriate.  Boys wore lace and ruffles and embroidery.  (There is an entire chapter on the Fauntleroy suit!)  All this sort of thing always interests me very much, because I got into heirloom sewing several years ago.  Heirloom sewing, I must confess, is a slightly crazy hobby, but it's great.  The idea is to create classic items with high-quality fabric, which is then detailed with handwork.  Heirloom sewists often recreate these old-fashioned styles Paoletti describes: daygowns for babies, smocked dresses for little girls, and so on.  Sewing for boys is always a slightly fraught topic.  At least once a year, you'll see an article on sewing for baby boys that insists that (for example) tatting is not lace, so you can put it on a boy outfit; daygowns are not dresses and are great for boys; eyelet embroidery is quite masculine; this embroidery has vines but not flowers and so on.  Boys also get overalls smocked with frogs and things like that, but "lace is for boys too!" is a forlorn refrain, constantly repeated in hopes of convincing a skeptical populace to embrace styles from 1900.


To a two-year old child in 1880, being "a boy" was in some ways a matter of faith and aspiration, not fashion.  By 1940, a two-year-old was able to identify himself--or another child--as a boy based on clothing alone.  According to what we know today about children and gender, this suggests that children still pursuing gender permanence learned that clothing indeed "made the man."  This capability would also have the effect of facilitating same-sex play, so important to social learning of gender.  As long as boys of this age had a say in how they were dressed, they would be likely to prefer gender schematic clothing, and gendered clothing would grow in importance as each successive generation reached adulthood.  (p. 83)

And, I would expect, the same applies to girls.

Paoletti devotes a whole chapter to the color pink, and the toy industry's current conviction that girls just naturally love pink and are drawn to it--to the point that it is now difficult to find things that aren't pink.  No matter how much you like pink, you don't want to have a constant diet of it!  (Myself, I'm pretty meh on pink, and often preferred blue or green for my girls.  I bought them baby and toddler clothes from either side of the aisle.)  This is a particularly interesting development when you realize that in the 70's, hardly any pink or pastel clothing was sold.  Children's clothing featured bright colors, and there was very little pink around when I was small.  It was the era of unisex clothing, and it quickly disappeared.  Paoletti chronicles all of it and it's so interesting!  She even theorizes that the supremacy of pink was partly brought about by the feminist movement's insistence that pink was a gendered color.  As pink was rejected in the 60s and 70s, it became much more closely associated with femininity than it ever had been before.  Now we teach little girls (through osmosis even if not directly) that pink is for girls, and so they want pink because they 'know' that it's for girls and they are girls and therefore they should have pink--because children between 2 and 5 are trying to figure out what it means to be a boy or a girl and they spend a lot of time applying the rules.

So--read the book if you're interested in the history of children's clothing (I didn't even mention skeleton suits!) or in the reasons why modern American children are given more gendered clothing and toys than ever before in our history.
history non-fiction