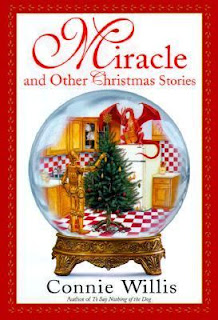 Miracle: and Other Christmas Stories, by Connie Willis

I re-read this collection every couple of years--I just really like it.  There's a very nice variety here: a funny one about a new-age Spirit of Christmas Present who only approves of recycled gift cards, a weird one about a pod-people style alien invasion, a heartbreaker about a lonely dad in a bookstore, a classic cozy mystery (with a twist), and even an Epiphany story.  But my very favorite is "Inn."  Makes me cry every time.

...the Christmas-story writer has to walk a narrow tightrope between sentiment and skepticism, and most writers end up falling off into either cynicism or mawkish sappiness.

And, yes, I am talking about Hans Christian Andersen. He invented the whole three-hanky sob story, whose plot Maxim Gorki, in a fit of pique, described as taking a poor girl or boy and letting them "freeze somewhere under a window, behind which there is usually a Christmas tree that throws its radiant splendor upon them." Match girls, steadfast tin soldiers, even snowmen (melted, not frozen) all met with a fate they (and we) didn't deserve, especially at Christmas.

Nobody, before Andersen came along, had thought of writing such depressing Christmas stories....

In the twentieth century, the Andersen-style tearjerker moved into the movies, which starred Margaret O'Brien (who definitely deserved to die) and other child stars, chosen for their pallor and their ability to cough. They had titles like All Mine to Give and The Christmas Tree, which tricked hapless moviegoers into thinking they were going to see a cheery Christmas movie, when really they were about little boys who succumbed to radiation poisoning on Christmas Eve.