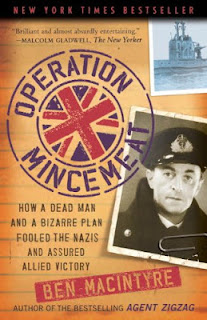 I guess this is my opposite-of-Christmas-spirit book.  I've actually been reading it slowly for weeks at the gym, and finished it during the Readathon the other day because I only had a chapter or so left.

The subtitle is "How a dead man and a bizarre plan fooled the Nazis and assured an Allied victory."  That pretty much covers it, though I think "assured" is way overconfident.  Anyway, "bizarre" is entirely accurate.  This is all about the secret-plan intelligence men in MI5 (Ian Fleming and his real-life model for Q feature heavily) and the crazy spy plans they came up with.

This particular spy plan was that they would find a suitable dead man*--harder than it sounds, even during the Blitz--manufacture a persona for him, load him up with fake top-secret documents giving away British plans for the invasion of Nazi-occupied Europe, and deliver him where the information would get passed on in a plausible way.  It was a hugely difficult and fiddly job that had to be passed off with finesse.  That is succeeded was due to some very lucky breaks, one or two of which are still a bit mysterious today.

It's a great story, though the author does have that tendency to load you down with piles of background information that is so prevalent in modern non-fiction.  At least in this case it is all really interesting background!

*See, they had to make him look like he'd died in a plane crash into the sea.  Luckily for them, autopsy science wasn't quite as advanced as it is now.  I kept thinking that Dr. Temperance Brennan would never be fooled!