Are you ready for the Children's Literature Challenge?

By Jean - December 31, 2012
I can't believe our event starts tomorrow!  December got away from me a bit, as I'm sure it did for many of you.  I'm looking forward to kicking off 2013 with some great children's literature.  Amanda at Simpler Pastimes has put up a great post of book recommendations, which I am reprinting here with her permission.  The comments are Amanda's, but I have put my own in on some titles in green italics.    She asks for further recommendations to be added to her comments, so head over and put your two cents in. 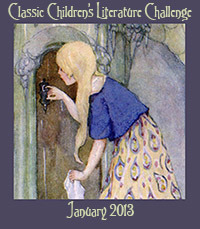 Amanda will be hosting a readalong of George MacDonald's wonderful story The Princess and the Goblin.  She also wants you to simply read whatever children's classics you choose, post about them, and link up at a page she will provide at the first of the month (tomorrow!).   Meanwhile, I'll be writing posts about lesser-known children's authors and their works--or just special favorites of mine that I can't resist!