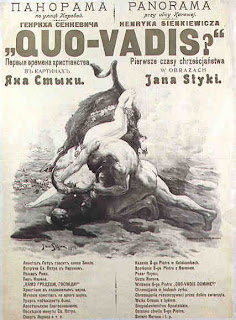 This title made it onto my Classics Club list when I was asking around for Polish classics.  "You mean besides the obvious choice of Quo Vadis?" someone asked, and I replied, "What's Quo Vadis?"   Answer:  Quo Vadis is a lot like Ben Hur, in that it's a very Victorian novel set in early Christian times, with lots of excitement to keep readers interested.   But it's set entirely in Rome, with action at Nero's court, and features St. Peter and St. Paul.

We have two wealthy Romans: Marcus Vinicius, a young military tribune just back from the wars, and his uncle Gaius Petronius, a (really historical) famous arbiter of taste with close ties to Nero.  Vinicius desires to possess Lygia, a beautiful young maiden who is the daughter of a defeated tribal king.  She is a royal hostage and has been raised by a nice Roman family.  (The Lygian tribe lived in Poland, so she's a native Pole!)  The two men scheme to get Lygia installed as Vinicius' mistress, but Lygia is a Christian and she has other ideas of what is right. 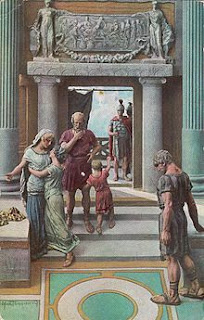 The story winds through the streets and royal courts of Rome, and there's plenty of intrigue and excitement.  Nero and Poppaea play a large part; we meet Peter, Paul, and the followers of Christ.  The great fire of Rome (where Nero fiddled, only he didn't) is the central event of the novel, and then, as we know, Nero decided to blame the whole thing on the Christians.

Ancient Rome was a very violent place (a book I really liked called the Romans 'kindergarteners with knives'), and this book doesn't leave that out.  It winds up being more violent than The Hunger Games.  So don't give it to your 10-year-old, but an older teen might really enjoy it if she can handle the language, which is full of thees and thys.  It is a devoutly Christian book, of course.


(I still don't have any other Polish classics, by the way, so if anyone has a suggestion, let me know.)
Classics Club