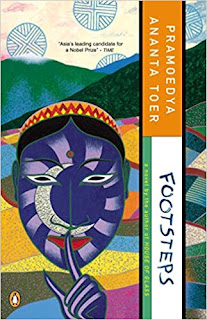 Footsteps, by Pramoedya Ananta Toer (vol 3 in the Buru Quartet)

My Spin title is actually the third in a quartet.  You can see the previous two books:  This Earth of Mankind, and Child of All Nations, in which Minke, who is very privileged for a Native in Dutch-controlled Indonesia, starts to get a grip on what colonial control has meant to his country.  At the close of the second volume, I commented:

This volume is pretty well entirely about coming to understand the workings of colonialism, but Minke seems to need even more knowledge before he can begin to act.

And at this point the story takes something of a turn.  In Footsteps, Minke learns more and does indeed start to act.  It's also at this point that the story becomes clearly modeled on a real-life person: Tirto Adhi Suryo, an Indonesian journalist who started the first Native newspaper.  Here, we cover the years 1901 - 1912.

At the start, however, Minke is just beginning medical school.  He's a whole year late, because of the events in the last book, and he hates medical school, but he's not bad at it.  He's just more interested in a lot of other things, such as how to get all the different peoples in Indonesia to work together for the common good.   And he meets a girl: Mei, a Chinese girl who is a connection to Minke's deceased friend.   They marry, but they can't live together, and Mei is obsessed with her activist work (she teaches Minke a lot), eventually becoming ill.  Their five years of marriage ends in her death.

Minke quits medical school and decides to go into politics full-time.  There is still no organization for Native interests, and he decides to start the first one.  Its newsletter functions as legal help for Natives in difficulties, and becomes the first Native newspaper.  The organization dies, though.

Minke marries again, to an exiled princess, daughter of a raja.  Together they dedicate themselves to this work, but eventually the powers that be find them too troublesome, and Minke is sent into exile himself.

There is a lot about politics; what the Dutch are up to, competing Indonesian groups, the question of which language to use (Minke prefers the democratic Malay to the intensely hierarchical Javanese, and then there's Dutch too), whether religion or nationalism should be used as tools in politics or not.   Minke's personal life is subsumed into his work, which is all-consuming and the focus of the story (even though he still manages to find Wife #3!).  He barely sees his parents, but his quiet, wise mother is a major power in his life anyway.

It's a great story.  Somebody ought to make a TV show out of this.  So much drama, betrayal, scheming, romance...it's got it all.  How will the final volume end?  I have deliberately not read the rest of Suryo's biographical summary, so I don't know.  What will Minke do in exile?  I'll find out in House of Glass.


A couple of quotations:

"Why do you try so hard to become other than your mother's son?"  Her gentle voice and her deep love were threatening my European-ness.  And I felt like an orphan of the modern age, without even traditional ties to kith and kin.  I had left East Java to become a person.  And now the love and compassion of my mother stood before me as a judge who would allow no appeal.

So my journeys through Java consisted not only in accepting half the honor bestowed upon me.  They also meant entering the jungle that was Javanism.  And the torch I took to show the way?  Small and weak.  No one knew better than I that my knowledge and wisdom were hardly sufficient for this task.  Sometimes I asked myself whether there was anyone else would would undertake such a strange task as this.  So far there was no one else but me.  And there was always the possibility that I might lose my way in this jungle.  My torch might go out.