I'd heard of this novel, but didn't know anything about it when I picked up a battered paperback from a donation box.  I figured if it was pretty famous I should read it.

Centuries in the future, humanity has an interplanetary civilization, and Zarathustra is a newly-settled planet.  Rich in resources, it's classed as having no sapient life and is run by a management company.  Then Jack Holloway, a prospector out on the edges, meets up with a critter so cute that it can only be called a Fuzzy.  Little Fuzzy clearly wants to live with Jack, and so he adopts him as a pet...but right away it becomes clear that Little Fuzzy is pretty smart.  In fact, he's got a spear, and he can figure things out, and make art, and the next thing you know he's brought the whole family in.  Pappy Jack is delighted with the Fuzzy family, and so is everybody else, except the executives of the Company.  Because if Fuzzies are sapient, they will have equal status before the law as a kind of people, the planet will be reclassified, and the Company will lose its charter and the enormous profits it's just starting to collect.

So it all becomes a race.  The Company would prefer to wipe Fuzzies out (they would make great fur coats!) and pretend nothing ever happened.  Barring that, they want to prove that Fuzzies are cute animals, but not sapient.  Assorted civilians, cops, and anybody who isn't a Company executive wants to prove that Fuzzies are indeed sapient -- but what exactly is the definition of sapience anyway?  Shenanigans ensue!

There are actually several Fuzzy novels; Piper published one sequel, and after his death a couple of other writers did other sequels.  A final Piper manuscript was found and published too, in the early 80s, which made for a total of five.  More recently, John Scalzi re-wrote the original story as a 'reboot' for current tastes, and Wolfgang Diehr wrote three more sequels, but it doesn't seem like those two collaborated.

It was a fun novel, and I wouldn't mind reading more.  At the very least, I've become familiar with a pretty famous SF novel I didn't know about before.  If you'd like to read Little Fuzzy, it's actually in the public domain, so easily downloadable from your favorite source. 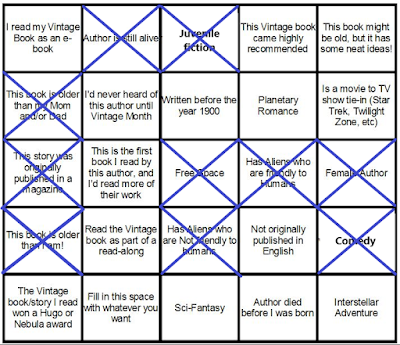