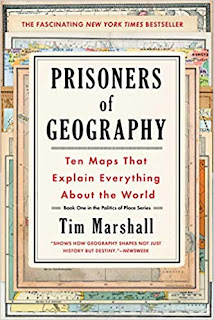 Prisoners of Geography: Ten Maps that Explain Everything About the World, by Tim Marshall

I've been having a lot of fun reading all that old-time SF, but I have also been reading regular books!  It's just, they are a lot slower.  So here is a non-vintage-SF book for you, that I found just fascinating.

Years ago, Jared Diamond showed readers that geography determined much of world history, because basic factors like domesticatable animals, navigable rivers, and mosquitoes are so important.  Tim Marshall shows readers that geography still does determine modern history and current geopolitics.  Why will China never, ever let Tibet regain independence?  Why will Russia do pretty well anything to keep Ukraine firmly under its thumb?  Why does everyone tread very softly around North Korea?  It all comes down to the cold, hard facts of geography.

In ten chapters, Marshall explains -- in a thumbnail version -- the past and present of various areas of the world.  We start off with the most depressing parts: Russia and China.  Then it's on to the US, Latin America, Asia, and eventually the Arctic.  In fact, the only area Marshall doesn't tackle, kind of inexplicably, is Oceania.  Eleven maps would have been fine.  But it's all quite gripping stuff, well-written but not heavy.  This is in fact a fairly fast and easy read, even hard to put down.  And being British, Marshall sprinkles in a lot of humor and wit (albeit sort of spottily; North Korea isn't very amusing).

The book was published in 2015, and is still pretty current, but pre-dates Brexit and the American 2016 election.  Both of those must have given him a shock.   He's a little more dismissive of Russia than he probably would be now -- he says Obama was right that it's mostly a regional power these days, but that underestimates how enthusiastic the Russian government is about disinformation and general undermining, and I think he even contradicts himself, given that he spends huge chunks of text explaining just how many countries depend on Russian oil and gas, and act accordingly.

So here are some bits I liked:


The Americans...are deeply unimpressed with the European countries' commitment to defense spending.    [On NATO and its importance]

If you won the lottery, and were looking to buy a country to live in, the first one the real estate agent would show you would be the United States of America.

Greece...still spends a vast amount of euros, which it doesn't have, on defense.

What is now the EU was set up so that France and Germany could hug each other so tightly in a loving embrace that neither would be able to get an arm free with which to punch the other.

The Europeans used ink to draw lines on maps: they were lines that did not exist in reality and created some of the most artificial borders the world has seen.  An attempt is now being made to redraw them in blood.  [On the Middle East]