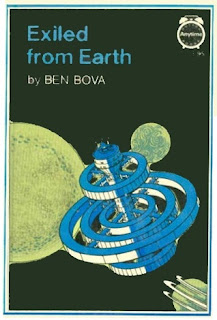 Exiled From Earth, by Ben Bova

Ben Bova is another new-to-me author!  This is a pretty short novel, the kind of thing a younger SF fan might read, but it does not feature kids.  Also, Ben Bova is 87 but he's still around.

In the future, there are 20 billion people on earth and the cities are no-go zones populated by vicious gangs.  Lou Christopher is a computer engineer at a scientific research center, where they are just on the verge of genetic engineering, and Lou's computer code is the key.  Pretty soon they'll be able to scan a zygote's DNA, find the broken bits, and rebuild them so that people can be born physically perfect geniuses!

Instead, the world government arrests all the geneticists and sends them into exile on a space station orbiting the Earth.  They figure genetic engineering will destabilize the careful balance they're keeping, and it's too dangerous.  Lou tries to escape, but failing that, is recruited by a government official who wants to keep going with the research.  He's got a secret island research center.  This sounds obviously Evil, but Lou signs up and asks for his secretary girlfriend, Bonnie, to be brought along too.

Bonnie is less than thrilled with being kidnapped to a secret, probably evil, island, but it's a good thing she's there, because she's the only one with any sense.  Lou and his physicist buddy are happily coding genes and making mini nuclear bombs (!) until Bonnie tells them that another department is making cortical suppressors.  This island is clearly a base from which to launch a planetary coup, in which half the world population will be stupidized so that the new rulers can build a race of supermen to replace them.

So the trio have to make a plan to save the world...but if they do, their reward will still be exile to a space station and no more research.

This is actually the first book in a trilogy, the other two being Exiles in Flight and End of Exile.  I'd be interested to read those!


I had fun with this book.  For one thing, they get lasergrams instead of letters, ha!  It's weird to see this older theory about genetic engineering, that it would be so easy to just fix DNA and make everybody super-strong and smart.  Now we know that it's much more messy than that, and so often, who's to say what's even a genetic mistake vs. an adaptation? 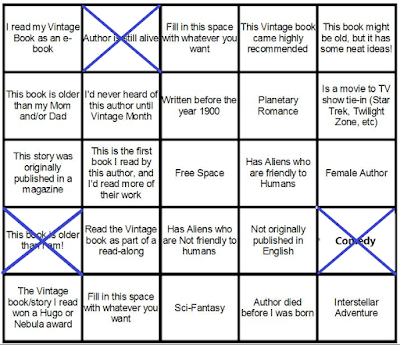