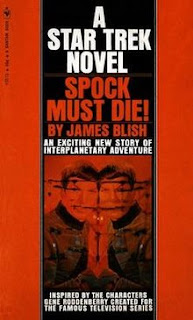 Spock Must Die! by James Blish

This was so fun!  I picked it up at a sharing shelf at the college where I work, and it has clearly made the rounds for a long time.  It's a library discard from someplace in Ohio, a good 40 years old, and started life as a paperback put into a library binding.

I figured out from the introduction that this must be the very first Star Trek novel ever written.  James Blish had been doing the novelizations of episodes -- I read a lot of those as a kid and have reviewed one here for a previous Vintage Sci-Fi post -- and when the series was cancelled, he wrote this novel too.  It's from 1969, and he's hoping that Star Trek won't die after only three years.  Well, James Blish, I think you got your wish!

The Enterprise is on a long surveying mission on the far side of the Klingon empire when the Klingons spring a massive surprise attack on Federation space!  The crew can't get back to help with the war, but they can try to help in a sideways manner.  They use the transporter, modified, to try to send a message through Spock to the thought-beings on Organia, but something goes wrong and suddenly there are two Spocks!  Which is the real one?  Are they the same?  Is one perhaps...evil?  There seems to be no way to tell.  Is the Enterprise big enough to hold two Spocks?

This really was a very fun story, with some interesting ideas thrown around.  This may be the first time the question comes up of whether the transporter actually murders the transportee, reconstructing a simulacrum every time from then on.  I also got a kick out of the solution to the Spock conundrum, which was pretty clever.

Some things are exaggerated -- Scotty's brogue sounds more like Robert Burns with every chapter -- and some things have worn oddly, like describing Lt. Uhura as both a highly respected member of the command team who outwits Klingons and also as "the Bantu girl" when looking for new descriptors.  That old-fashioned habit of always trying to come up with fresh descriptions of a known character has died a well-deserved death, hooray!

And some elements are just kind of odd.  Here is Dr. McCoy explaining stuttering to Cap'n Kirk:


"...if the left hemisphere of your brain is dominant, as is usually the case, you will be right-handed -- and vice versa.  And so, Jim, the retraining of left-handed children to become right-handed -- in complete contradiction to the orders the poor kids' brains are issuing to their muscles -- badly bollixes up their central nervous systems, and, among other bad outcomes, is the direct and only cause of habitual stuttering."

To finish off, here is one bit that made me laugh.


Most battles in space are either over almost the instant they begin...or become very protracted affairs, because of the immense distances involved.  (The first sentence of Starfleet Academy's Fundamentals of Naval Engagement reads: "The chief obstacle facing a Starship Captain who wishes to join battle is that battle is almost impossible to join.")

I suppose every really committed Trekkie has read this fun little novel.  But I never got into Star Trek novels, and this was entirely new to me.  I'm glad I spotted it and took it home. 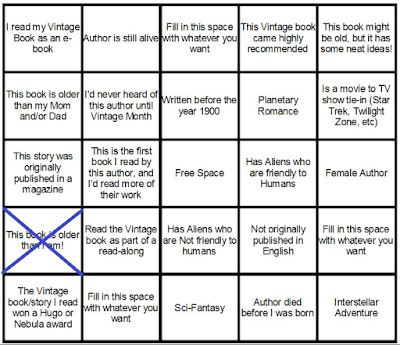