Vasily Grossman and the Soviet Century 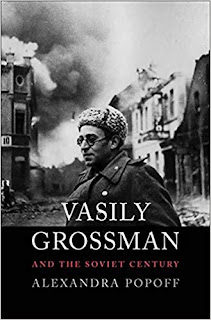 Vasily Grossman and the Soviet Century, by Alexandra Popoff

Vasily Grossman isn't anywhere near as well-known as he ought to be.  My plan is to read some of his books, but they're heavy stuff so I thought I'd start with this biography so I could get situated.

Grossman was born in 1905, in the Russian Empire, and was educated as a chemical engineer in the USSR.   He changed careers and became a writer and journalist in the 1930s -- he was always trying to tell the truth about what he saw, so his first novel was about the miners he'd known at his job.

He then worked as a journalist attached to the army during the war, and was present through nearly all of the battle of Stalingrad.  He was also one of the first people to witness what had happened Treblinka.  After the war, he had to deal with constant censorship and difficulty, as he spent just about the rest of his life trying to communicate what he knew and believed.

He worked on the Black Book of Russian Jewry, only to have it blocked from publication in the USSR.  His first really major novel about the war took years to publish, as editors and committees issues conflicting orders about what to edit or cut, especially the Jewish bits.  It sounds torturous.  The next big work, Life and Fate, was simply confiscated completely.   Two extra copies had been hidden with friends, and it was eventually smuggled out and printed after great effort, but Grossman had died years before.

If he'd lived longer, or if his work had gotten a little bit luckier with timing, I think he would be well known as the major writer he is.  OK, I haven't actually read any of his work yet.  But that's up next!  There is lots of good stuff in this biography; fellow fans of Russian history and literature, take note.


Grossman, among the first to write about the Holocaust, realized that the slaughter of millions must be explained beyond statistics.  Individuals cannot relate to the murder of people en masse in the same way they can to a single death.  Grossmas possessed a unique ability to describe multitudes with personal, individual detail....

Tvardovsky [publisher of Novy mir] was by then absorbed with his new author, Solzhenitsyn, and used his influence with Khrushchev to publish One Day in the Life of Ivan Denisovich.  Curiously, Tvardovsky admired Solzhenitsyn for the very things he disliked in Grossman.

Grossman expected that Solzhenitsyn might want to come and see him.  Had they met, he would have discovered that Solzhenitsyn's attitudes to freedom, democracy, science, Russian history, and "the Jewish question" were incompatible with his own.

[After appealing to Khrushchev to release his novel] Grossman spent five months anticipating a response: in the daytime he stayed in his apartment so as not to miss a phone call from Khrushvhev's office.  In July, just as he gave up and went out for a walk, someone from the Central Committee phoned.