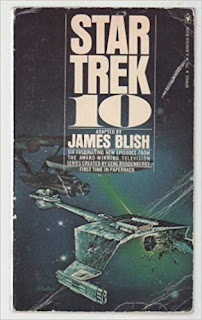 It's yet another in that series we all read at the library as kids, in which Blish novelized the original Star Trek episodes.  I didn't even know it went up to 10!  This one does have a great Klingon ship on the cover.

There are six stories, and I actually couldn't remember some of them, so I wound up watching a couple too.  The most famous on this list was "The Galileo Seven," and there was also one of the worst episodes ever, "The Omega Glory" (that's the one with the Yangs and the Kohms and the pledge of allegiance).   I've never been much of a fan of "A Private Little War," either.

"The Alternative Factor," for instance, I didn't remember at all (and I still haven't watched it).  This guy named Lazarus keeps screaming about a monster who will destroy everyone, but then sometimes he's calm.  Spock figures out that they're alternate-dimension versions of each other, and one is a madman -- but which?  I picked the wrong one.  The two Lazaruses end up caught between universes, forever battling for dominance -- a trope that has since been used a few times, but I'm not sure if this is the first?  Probably not?

"The Empath" features the Dynamic Trio (can you think of a better name?) trapped underground in a sort of arena, in which they are tortured for no apparent reason.  There's a girl there who can't speak, who is an empath.  Will she subject herself to pain for the benefit of others?

I did quite like "Is There in Truth No Beauty?" in which a super-beautiful psychologist brings an alien on board.  No human can look upon this alien without going insane, so he lives in a box.  The poor psychologist is constantly hounded by various men who are dazzled by her, so it's quite understandable that she just wants to merge with the alien and be left alone.  Then a guy looks at the alien and goes insane, and...so does Spock!

This wraps it up for my Vintage Sci-Fi January.  I had fun!  Though I didn't get anything that looked like a bingo of any kind,  I had a good time filling out my bingo card.  Thanks, Little Red! 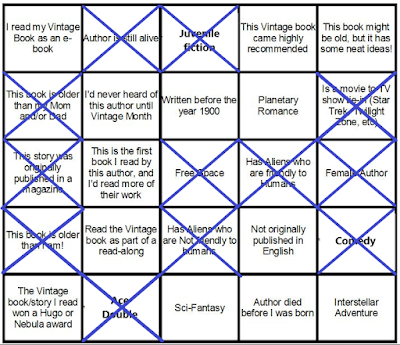