The Voice That Thunders 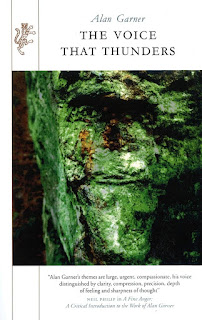 The Voice That Thunders, by Alan Garner

Remember last month, when I posted about Four British Fantasists and there was quite a bit about Alan Garner, but I didn't really love Boneland?  Well, the book also quoted a collection of Garner essays, and I ILL'ed it for fun.  I really only expected to skim through it, but to my surprise...

I enjoyed this book of essays so much!  It turns out I like Garner's essays better than his novels, maybe.  They are, of course, still wildly obsessive about his corner of Cheshire, but he's so much more descriptive that it winds up being a lot of fun; it invites the reader in instead of closing out.

These are actually mostly speeches given at various meetings, with the odd essay thrown in.  Garner produces this nice mixture of discussion about his family history; Cheshire language, history, and folklore; archaeology; and his writing.  And also his struggles with his mental health; what he thought was depression turned out to be bipolar disorder, and he has an interesting talk about that.

As with any collection like this by one author, it hits certain themes over and over, but actually it's not too bad.  There's a nice variety here and a lot of highly entertaining stories.  My favorite was the one about how, as a teen, he was reading some old articles about local archaeology* and saw a drawing of a battered wooden shovel, which he knew he'd seen before -- but of course he couldn't remember where.  A few days later, the lightbulb went on in his head; he'd seen it as a little boy in the classroom, hanging on the wall.  So he ran off to the school, but the shovel was gone, either thrown out, or perhaps stuffed under the stage?  So under the stage he wriggled, and searched, and found the wooden shovel, which he kept with him for years until he found somebody he could convince to look at it and take it seriously as a prehistoric artifact, which indeed carbon dating proved it to be.

So, this was a surprisingly engaging collection that I enjoyed and read completely, instead of skimming it as I'd planned.