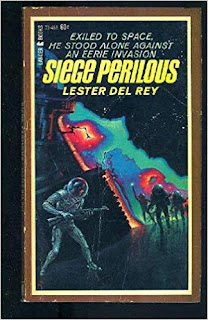 In the not-too-distant future, Earth has an orbiting space station, which is meant to ensure world peace (especially for the nation that built it) under shifting alliances within a Cold War that never really ended, but which currently has Russia allied with the US against Eurasia.  Most of the staff are there for only a few months at a time, since living in space is hard on the mental health, but Fred Hunter has been there for ten long years, ever since the station was built.  He built quite a lot of it himself, in fact, before the accident that rendered him unable to return home.  Fred is always and forever homesick, but he has stubbornly remained sane.

Then the station is invaded and taken over in a matter of just a few hours, but who are the guys wearing those spacesuits?  Not Eurasia.  A small, scrappy nation?  The invaders' suits are out-of-date, so maybe...but then when they speak, the mystery deepens.


"Mount your cayuses and ride out if you don't want a bellyful of hot lead!"

"All right, you guys. You were real cute.  But we're through playing around, see?"

Where could these invaders possibly have come from?  Nothing they do makes sense.  Fred, Sandy, and Callaghan are the only station staff who didn't get caught, and if they don't want the Earth destroyed, they'll have to figure something out fast.

I guess spoilers for a novel written in 1966 don't matter, so I'll tell you the solution: the invaders are underground dwellers from Mars, and have been watching old Earth movie broadcasts for years.  But, like the Thermians in Galaxy Quest, they don't understand story-telling and so are convinced that Earth people are cowboys and gangsters intent on invading Mars.  Their tactics are entirely based on melodrama.

It's a fun setup, and involves a good deal of MacGyver-esque improvisation as well, so I liked it. 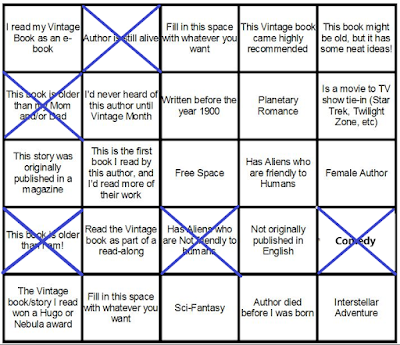