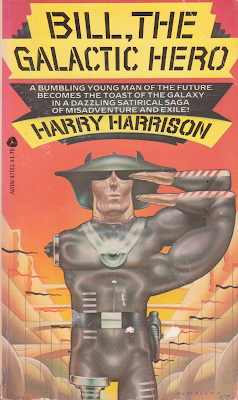 I've never read any Harry Harrison!  He wrote The Stainless Steel Rat stories, and also the story that became the film Soylent Green.  So I'd heard of him, but this was the first book I've actually read, and it is from 1965.

Bill is a simple farmboy, drafted into the military for the endless war against the Chingers -- giant 7-foot lizards.  After a miserable time at bootcamp, he joins a ship and has a miserable time there, but he accidentally becomes a hero too.  So he's got a new arm that used to be his buddy's, and he's off to the center of the galactic empire, Helior, to get a medal.  Helior is just like Coruscant or Trantor, and poor Bill gets lost in the endless labyrinth.  Now he's AWOL...

I think this is really a darkish SF comedy for GIs.  I can see an army vet getting a lot of laughs out of this story, which plays with the miseries and pointless conundrums of military life.  It didn't do a whole lot for me -- I'd say it was fairly entertaining -- but then I didn't serve in the Army.

So, would I like the Stainless Steel Rat?  I thought I had read it, but it must have been something else. 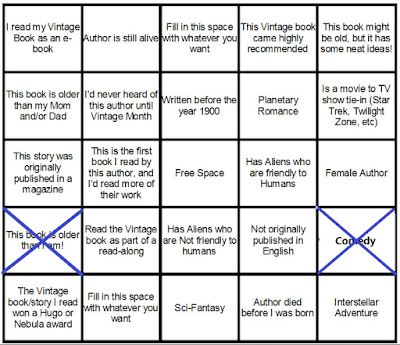