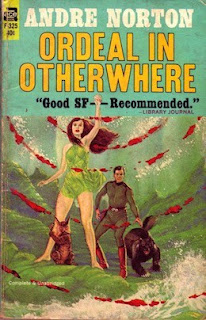 Ordeal in Otherwhere, by Andre Norton

It's very odd, but I've never read Andre Norton.  Her books were all over the house when I was growing up, because my sister was a big fan, but I never picked them up.  So this year I decided I'd have to give Norton a try.  We had a few around the house, but they were all fantasy, so I got some from my sister's old room -- there was a whole pile.  I picked this one.

This incredibly amateurish cover hides a pretty good story set on the world of Warlock.  Some googling taught me that Warlock books are not the same as Witch World books; there are five Warlock books, called the Forerunners series, and it turns out that the first one is in my pile too, and the only reason I didn't pick it was that it's in a protective bag with a price tag on it, which made me nervous.  OK, so...

Charis, member of a planetary colony gone wrong, is sold to a trader and ends up on the planet of Warlock, where she is supposed to work out trade deals with the inhabitants on behalf of the newly-established human traders -- these folks only want to deal with females.  But!  The Wyverns, who live in the sea, have powerful psychic talents, and instead Charis just finds herself living with them in a wondrous dream...until it turns out that the Wyverns also have some serious problems of their own.

Working as a team with her special cat friend, and an Earth officer with a wolverine, Charis is going to have to figure out how to use her newly-learned powers to save the humans, and also to convince the female Wyverns that they can't just use their males as slaves forever.  A society split in half like that cannot last, and is vulnerable to outside attack.  The fact that she works in partnership with a man has to serve as proof that it can be done.

So, a neat story that I liked.  Have you had enough Vintage Sci-Fi Month yet?  I promise I'm reading other things too, but they are long. 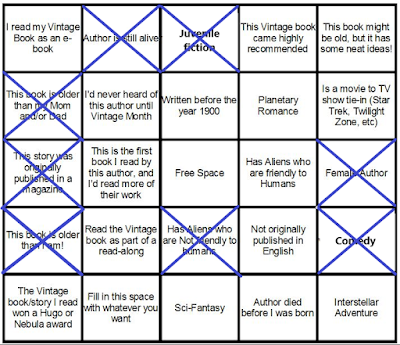