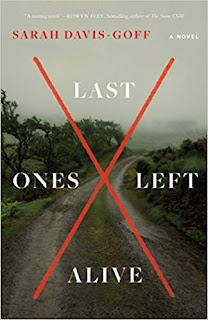 I was intrigued by the premise of this story, which is that Orpen has grown up on a tiny island off the coast of Ireland with just her mother and Maeve, who have raised her to fight the skrake, the monstrous menace that destroyed their world.  Now Orpen has to go in search of other survivors, if there are any.

But I found it kind of disappointing.  Orpen spends her whole life wishing to go to the mainland for adventure, to see something new, to learn about the world.  The adults around her won't talk about it or explain, which seems like the obvious way to get her to run off unprepared at her first chance.  The skrake, which sounds really interesting, turns out to be....well, I'll put it down at the bottom, if you was to avoid spoilers.*

So Orpen is on her way to find Phoenix City, which is supposed to be full of banshees -- formidable women warriors.  Again, every human being she meets tells her that it is not a good place and she shouldn't go there, but they don't explain why.  None of these people know anything about teenagers, I guess.

And despite crossing Ireland twice, it never feels like she is anyplace in particular.  There are some town names, and it rains sometimes; that's about it.

I think it's set up for a sequel, but I might be too irritated to read it.