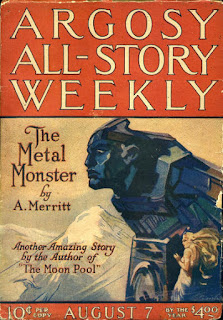 The Metal Monster, by A. Merritt

I've never heard of A. Merritt, but he was pretty well known; just a long time ago.  The Metal Monster first appeared in 1920 as the inaugural story for Argosy magazine.

Four American explorer-scientists (three men, one woman) meet up in the Himalayas and witness some very unusual phenomena in the sky.  Then they run into a vicious crowd of ancient Persian soldiers, the descendants of the Persian armies defeated by Alexander, who fled into hiding.  They take refuge in a cave, where they discover a mysterious arrangement of metal shapes...which move.

As the soldiers attack, they flee and find a beautiful woman who commands more of the metal shapes.  Arrangements of cubes, pyramids and spheres move and change to do whatever they need to do.  They're clearly intelligent, and Norhala leads the scientists and the cubes back to a massive city hidden deep in the mountains.  The city is itself made of these living metal shapes!  As the crew explores, they try to understand: do these Metal Things grow?  Eat?  Think?  How do they work?  And while they seem benign, even friendly, in an alien sort of way....do they threaten humanity?  The "Monster" in the title is the city itself, not a robot or creature.

The ancient Persians come back, of course, but after that the story takes a truly surprising turn.  I was not expecting that ending at all.

This is a really neat, original story!  It has some very nifty ideas.  The Metal Things reminded me of nothing so much as Hiro's microbots in Big Hero Six, but more complex.

It's all written in very flowery prose.  Merritt never met a two-dollar word he didn't like. Many of his descriptions are massive cascades of fancy words!  He especially liked colors, the more nuanced, the better.  This is probably the most colorful novel I have ever read.  Amethystine was one of the words, I recall.  I give you a couple samples, the first of which is only part of a simple sunset in the mountains:


...as though a gigantic globe of crystal had dropped upon the heavens, their blue turned swiftly to a clear and glowing amber -- then as abruptly shifted to a luminous violet.  A soft green light pulsed through the valley.  Under it, like hills ensorcelled, the rocky walls about it seemed to flatten.  They glowed and all at once pressed forward like gigantic slices of palest emerald jade, translucent, illumined, as though by a circlet of little suns shining behind them.  The light faded, robes of deepest amethyst dropped around the mountain's mighty shoulders.  And then from every snow and glacier-crowned peak, from minaret and pinnacle and towering turret, leaped forth a confusion of soft peacock flames, a host of irised prismatic gleamings, an ordered chaos of rainbows.

Its head was a pyramid, a tetrahedron; its length vanished in the further darkness.   The head raised itself, the blocks that formed its neck separating into open wedges like a Brobdingnagian replica of those jointed, fantastic, little painted reptiles the Japanese toy-makers cut from wood.  It seemed to regard us -- mockingly.  The pointed head dropped -- past us streamed the body.  Upon it other pyramids clustered -- like the spikes that guarded the back of the nightmare Brontosaurus.  Its end came swiftly into sight -- its tail another pyramid twin to its head.

I think this can fairly be called an early science-fiction classic.  It's a lot of fun to read, if you can take the amethystine prose, and it has some really cool ideas.  I gather that Merritt wasn't really all that satisfied with the story, and it was only published in book form in 1946 after some cutting and editing, and that's the version I read.  So maybe it's better than the original, who knows. 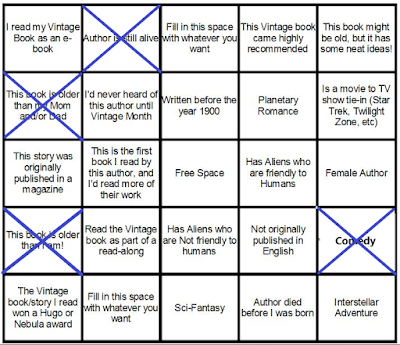