By Jean - August 25, 2017
Here is a whole set of books I've read from various countries in the last few weeks.  Most of them will show up in my Reading All Around the World list, and one I picked for August's Women in Translation event, which I nearly missed!  Most of these were also on my original 20 Books of Summer list (which currently stands at 17!  No way will I finish that list in the next week, but I read quite a few other books too). 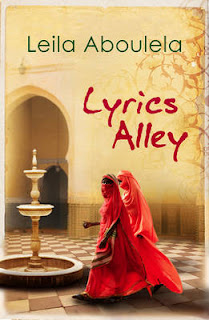 Lyrics Alley, by Leila Aboulela  (Sudan): This novel of a wealthy and powerful family in 1950s Sudan is a tapestry of interwoven lives.  The patriarch, Mahmoud Bey, is a forward-looking man invested in bringing infrastructure and wealth to his country.  His son, Nur, is about to marry a cousin and they are very much in love, but a tragic accident leaves Nur paralyzed and depressed.  The family dynamics are complex and sometimes disastrous. Nur has to break through the weight of expectations and pity in order to forge a new life and identity for himself.

Parts of the novel are told through different narrators: Soraya, a young student engaged to Nur, starts the story, but Mahmoud Bey's second wife Nabilah has part of it, as do Nur and his teacher Ustaz Badr.  It took me a while to get into the story; I had a hard time with it at first, but once I got involved I was eager to see where everyone ended up.  It turns out that Aboulela based the whole thing very loosely on her own family history, so that was neat. 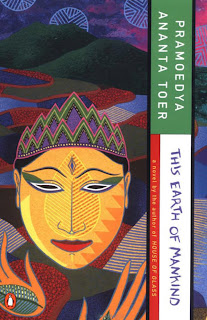 This Earth of Mankind, by Pramoedya Ananta Toer  (Indonesia): This is the first volume in the Buru Quartet, which Toer narrated day by day while a political prisoner on Buru Island.  He was arrested, never tried, and spent 14 years there.  All four novels were banned in Indonesia until 2000; the afterword says that "the government accused the books of surreptitiously spreading Marxism-Leninism -- surreptitious because, they claimed, the author's great literary dexterity made it impossible to identify actual examples of this Marxism-Leninism."

Minke is a brilliant young Javanese student -- the only Native in his prestigious school, in fact.  It is 1898 and Indonesian society is strictly divided into Pure Europeans, Indo-Europeans, and Natives, the last group having almost no legal rights at all.  Minke is invited to visit an unusual household where Nyai Ontosoroh, the Native concubine of a Dutch businessman, runs the entire enormous business operation herself.  The daughter, Annelies, has led an isolated life and she and Minke fall deeply in love, but colonial law threatens to destroy everything they have worked for.

It will probably take me a while to read all four novels, but I do want to, and I've got the next one now.  Minke's story is complex and fascinating, and wow did I learn a lot about Dutch colonialism in Indonesia. 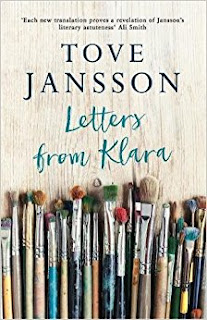 Letters from Klara, by Tove Jansson  (Finland):   Jansson's adult works have little in common with her Moomintroll books for children, but they do share a penchant for a feeling of remote mystery.  In these short works, most of the story is under the surface and left untold.  Some of them are only a few pages long, such as "Robert," in which a standoffish student in an art class writes letters to each fellow student, breaking off non-existent relationships.    In "The Train Trip," a man meets an old classmate on a train and finds out how different recollections can be.  And in "Pictures," a young artist leaves home on a scholarship, but only paints his own landscape while his father contends with terrifying hallucinations.  Tove Jansson really knew what she was doing with the short story format.

Jansson lived in Finland and wrote in Swedish; there are a lot of Swedish-speaking Finns.  So I'm counting this title for Finland, but maybe sometime I'll read a book translated from the Finnish too. 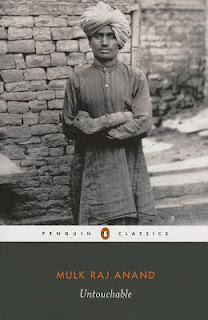 Untouchable, by Mulk Raj Anand  (India): This day-in-the-life story, written in 1935, reminded me a bit of Ivan Denisovich.  Bakha is a strong and handsome young man, but he is a Dalit; he has no caste and his fate is to work at the filthiest of jobs.  He cleans a set of latrines over and over.  When he accidentally bumps into someone on the street, it becomes a dangerous public humiliation for him.  We follow Bakha through a whole day of difficulties and small moments of ease, until finally he sees a visit from Gandhi, on his tour speaking against caste divisions.

One thing this novel will convince the reader of: modern toilets are a massive blessing to humanity -- especially the poor -- and life is a lot better with them.  Anand paints a realistic and painful portrait of Dalit life; it's an important classic of political Indian literature. 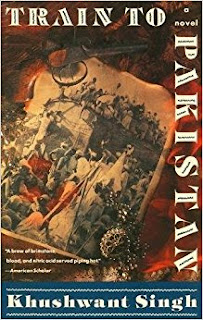 Train to Pakistan, by Khushwant Singh  (India): So then to follow up, I read this novel about Partition in 1947.  A North Indian Punjabi village -- half Sikh and half Muslim -- has not yet been touched by the violence raging across the country.  But it sits right on the train line to Pakistan, and although the villagers vow to stick together and defend each other, their alliance can't stand up to events.  This is another important Indian classic that hurts to read. 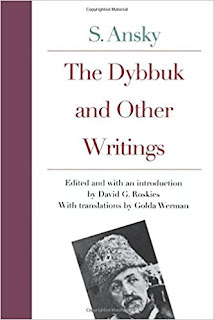 The Dybbuk, and Other Writings, by S. Ansky:  Ansky was a Yiddish writer who traveled throughout Eastern Europe, recording ethnographic observations.  He rejected the religion of his heritage, but had enormous commitment to the Jewish people.  "The Dybbuk" is a strange play in which a bride becomes possessed with the spirit of a dead young man who is convinced that she is rightfully his.

There are also several short stories portraying Jewish peasant life, some of which are pretty sordid (not as fun as Fiddler on the Roof!) and others featuring starving scholars concerned with politics, like Ansky himself.  Finally, there is a piece of descriptive history, "The Destruction of Galicia," chronicling vicious pogroms in a part of Ukraine.


Six mini-reviews!  Now we're getting somewhere...I still have one more book I'm reading for WIT August, and I hope to have that finished soon so I can write about it in August.  And hey, guess what, I finally finished the Faerie Queene!  So I need to write a post for that too.  Stay tuned.