At the Pulpit, and a new event: #BloggingTheSpirit

By Jean - August 27, 2017
Laurie at Relevant Obscurity had the excellent idea of reserving one day a month to talking about spiritual-type stuff, since many of us are a bit shy on this topic.  She says:

A call for anyone with social media to post something on religion or spirituality. Post a book review, a personal post on how you practice, or what connects you to God/Spirit/The Big Cheese, a poem/photo/piece of art that inspires you.

Use #bloggingthespirit on August 27th on Twitter and Instagram or my blog so we can find you.  Jews, Christians, Muslims Pagans, Tree-Huggers, Those-Inspired-by-Life, see you on the 27th!

For the first post, Laurie talks about a book of Madeleine L'Engle's that I have not read in a long time.  Go check it out! 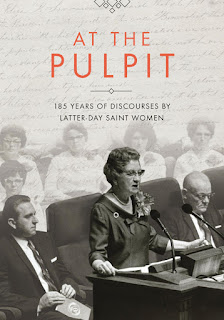 At the Pulpit: 185 Years of Discourses by Latter-day Saint Women, edited by Jennifer Reeder and Kate Holbrook

Early in the summer I bought myself a small pile of books on religion, and I was particularly excited about this one.  It's huge, though, so it took me a while to read.  LDS women have been speaking to each other and to a general public since the beginnings of the LDS Church, and I've always been fascinated and inspired by the lives and words of early LDS sisters.  They were amazing women.  What I have not necessarily done before is to read about LDS women of the 20th century, and it turns out they were pretty amazing too.

The earliest of these pieces are spontaneous talks, sometimes quite short, and usually not written down word for word.  For example, I really liked Jane Neyman's piece in 1868, summarized in the meeting's minutes:


Mother Neyman addressed the meeting on the subject of charity, encouraging all to be forbearing and forgiving, refraining as much as possible from scrutinizing the conduct of our neighbors, remembering always that we are human and must therefore err.

Mother Neyman went on to spin a long allegory about charity digging a grave and burying all malice and envy, with all sorts of poetic imagery.  It's all still entirely good advice for our era.

The early discourses also include poems or hymns, which many women used to express their feelings more eloquently than they could in prose.  Many of the names in this section were familiar to me as women I have read about before.

As the pieces moved ahead into the 20th century, the names became less familiar and I didn't know as much about the context, except of course in wider world history.  It was neat to see these sisters confronting war and the modern world, and encouraging each other to become educated and active in the world.  I enjoyed many of the mid-century pieces a lot.  Then, as we moved later into the 20th century, we got to people I'm very familiar with, who I've seen speak (on TV, I mean, not in person).  For some of these talks, I was a teenager and not very prepared to understand or appreciate what they were saying.  For one or two, I remember when they were given, as with Chieko Okazaki's section (she was very popular and I have several of her books).  The last few pieces were not as famous, but they were excellent, and I really liked those.

The cover shows President Belle Spafford of the Relief Society speaking in General Conference in 1966.  She was president for about forever in the mid-20th century, and did a lot of pretty neat stuff.  The Relief Society is the LDS Church's women's organization, and is called such because one of its main purposes is to provide relief to the poor and/or suffering, and also because it was named in 1842, so that it sounds odd to modern ears.  But boy, if you want to learn church lady skills, the Relief Society is where it's at.  (Church lady skills, which are universal, include providing meals, giving rides, planning funerals or other large gatherings, showing up to disasters with diapers in one hand and food in the other, teaching lessons on any topic to any age group, and cleaning really scary houses, all on very short notice.  I should start a list!)

So I guess this isn't the most informative post I've ever written, but this is a necessary book for the small number of people interested in LDS history or LDS women in particular.  There is a lot of great stuff coming out right now on history and especially on women in history, so pay attention!