The Treasure of the City of Ladies 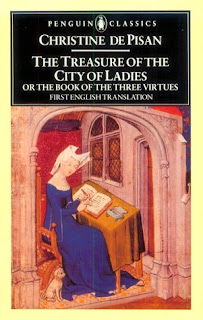 The Treasure of the City of Ladies, by Christine de Pisan

I love Christine de Pisan so much, I cannot even tell you.  I discovered her Book of the City of Ladies several years ago, and it's a must-read if you like medieval literature.  Widowed at 25 with three children, a mother, and a niece to support, she became a professional writer to pay the bills, but she did it in about 1390.  She started with lyrics -- your standard love ballads and so on -- and then moved into longer poetic and historical works.  The popularity of the Romance of the Rose inspired her to argue with the misogynistic portrayal of women in Jean de Meun's part of the poem and she took a large part in "the debate of the Romance of the Rose," a literary and scholarly correspondence with various other writers.  In 1404 she wrote the Book of the City of Ladies as her public answer to the whole question of women.  In the next year, she wrote this 'sequel,'  of which more anon.

After writing Treasure, Christine continued to write professionally and kept up her interest in public affairs, writing on war (seriously, she wrote a practical handbook for soldiers!) and also the prevention thereof, begging for an avoidance of civil war.  She continued to write on governance until 1418, when she entered a convent, and afterwards she wrote only one political item: the 1429 Hymn to Joan of Arc, the only contemporary account of Joan that we have outside of the trial records.  Christine may not have lived to see what happened to Joan, actually; we don't know when she died but it seems to have been not too long afterwards.  Joan of Arc was killed in 1431, a couple of years later.

The Treasure of the City of Ladies is a handbook to women's survival.  Christine re-introduces her three ladies, Reason, Rectitude, and Justice, and has them compile a book of practical advice for getting along in the world.  Christine must have been a very practical woman, for she always prefers to write about reality.  She hardly ever bothers to talk about how the world ought to be and how women ought to be treated; she simply goes straight on to dealing with facts.  And she starts at the top: the first chapters address how a queen (or, as she says, princess) should order her days.  The wise princess must be up on all the business of the court, be careful and discreet, keep a firm hand on the staff, and of course always virtuous and without reproach.  There is a lot on how to deal with scheming enemies and those who would do you harm.  All of this is addressed specifically to queens, but everyone else is advised to use the rules as well, for "everything that has been said before can apply to one woman as much as to another."

Christine goes through every possible station of life from the top down, mostly, of course, addressing the women who would actually be reading her book.  So there is advice for widows (watch out; everybody will try to cheat you, as Christine knows from bitter experience), newly married women, young maidens, older chaperones of foolish young maidens (and how to head off disastrous love affairs), and then women who live on country estates, merchants' wives, and then all the way on down to servants, peasants, and even prostitutes and the absolutely indigent.   These last are probably more to indulge the medieval love of completeness than anything else; it is not likely that any chambermaids read Christine's work, but we wouldn't want to leave anyone out!

Christine's main rules are:
She is just so hard-headed and sensible; it's a lot of fun to read.  It's also crammed with little illustrations of everyday life, which is both fascinating and rare.  Christine is living in the middle of a chivalry-obsessed nobility that mostly likes knightly tales of glory and romantic love, which by definition is adulterous  -- and hers is just about the only account we have of how that worked in real life.  She warns several times against falling for the eloquent blandishments of rogues.  That stuff is fine for poetry but don't think it will work out in your favor if you try it!

I marked a lot of passages, but I'll just quote a few:


This work is the proper duty of the wise queen and princess: to be the means of peace and concord, to work for the avoidance of war because of the trouble that can come of it.

Since it is the established custom that knights and squires and all men (especially certain men) who associate with women have a habit of pleading for love tokens from them and trying to seduce them, the wise princess will so enforce her regulations that there will be no visitor to her court so foolhardy as to dare to whisper privately with any of her women or give the appearance of seduction....

...we say, in regard to lovers, that although they are all supposedly faithful, discreet, and truthful, they are not.  On the contrary, one knows many of them who are false.  To deceive ladies they say what they neither want nor intend to do.

This really is a survival manual.  It was a tough world, and women were vulnerable.  Christine had advice for how to navigate it successfully.  I think she's great.