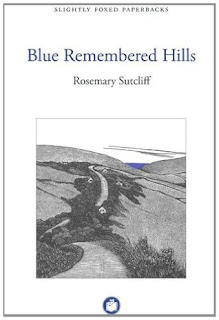 A couple of years ago I wrote a post about Rosemary Sutcliff for the children's literature event, in which I mostly talked about her books and the fact that her mother had spent a lot of time telling her ancient stories and legends, which had led to her literary focus on Roman and Celtic Britain.  The interesting thing about this memoir is that it doesn't talk about any of that.  It's entirely about other subjects, and so there were lots of new things to find out.

Sutcliff was an only child, and her father was in the Navy, so they moved around a good deal.  She spent several years of early childhood in Malta!  Her mother was attractive but volatile (she probably had bipolar disorder), and dedicated herself to nursing little Rosemary in ways that were both heroic and stifling.  Rosemary suffered from Still's Disease, which is a kind of juvenile arthritis, so she was frequently hospitalized or getting surgeries, and she could not always walk.

The larger part of the book is about Rosemary's childhood before age ten, and it's good reading.  She was an interested child -- interested in the whole world around her, in the little details of the world, and not all that conscious of her disability (as she notes, a small child takes every circumstance as normal).  She was given to making awkward observations, too.  And she is honest about her difficult relationship with her mother, who wanted to be everything to her child and insisted that she knew absolutely every thought Rosemary had.

As a teen, Sutcliff attended art school and became a talented miniaturist, but that was never her real interest.  Secretly, she started writing.  She does not talk much about it -- more space is given to a difficult and hopeless love -- but that was the beginning of a long career as one of the best historical novelists for children of the 20th century.

A lovely memoir, and I'm glad I got to read it.
English literature memoir/biography

Jean said…
OH you have got to read her stuff. Most of it was set in her own Britain, but she also did fabulous retellings of the Iliad and the Odyssey, the kind you read aloud to an 8yo. Go read Eagle of the Ninth! Or The Shining Company!
November 2, 2017 at 2:04 PM