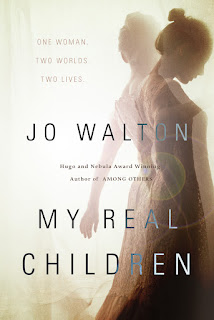 My Real Children, by Jo Walton

Patricia Cowan is very very old, and she lives in a nursing home.  It's 2015 and she's had a good long life, except that she has two sets of memories.  She remembers raising four children in an unhappy marriage with Mark, and being called Trish.  She remembers a happier life as Pat with Bee and three children.  Which is real?  Are they both real?  Is she switching universes?

Not only that, the world is different too.  The world with Mark in it is fairly peaceful and has moon bases, while the world with Bee has the occasional exchange of nuclear bombs.

In alternating chapters, we see both of Patricia's lives unfold.  (Honestly, it can be a little tricky to keep track of some characters!)  Which one is she, and can they both be true?

I was actually more gripped by this novel than I expected to be.  Sometimes I was a bit annoyed with it, but on the whole it really kept me interested and there was a lot to think about -- again, more than I had expected.  At the beginning, it reminded me just a little bit of Fire and Hemlock; I couldn't help wondering if Walton was a bit inspired by Polly's realization that she has two sets of memories.  The story goes in a completely different direction, but I did wonder if a few phrases were deliberate callbacks.

I am more interested now in reading further Jo Walton books, so that probably means that this novel was a success for me.

In other news, my state is on fire again, and it's really bad this time.  I don't live anywhere near Somona county, where it's the worst; that's where all the terrible news and pictures are coming from.  Here where I live, there have been three fires, and they have not been pleasant at all, but they are nowhere near the scale of Sonoma's.

If you're wondering why California suddenly seems to be on fire, it's because October is actually the most dangerous part of the fire season, and this year has been a bad one.  We had a good wet winter, so everything grew a lot and then dried out.  We don't really get rain again until winter, and in October we often get strong winds.  On Sunday, it was very windy indeed; I went for a lovely walk and enjoyed it, but by the evening several fires had been sparked and with the winds they grew quickly.  These fires are usually in hilly, brushy areas that are hard to get to.  This is the worst year since 1991, when the Oakland hills burned, and it may get even worse, as the Sonoma fires are not yet under control.
SF/fantasy TBR challenge

Kristen M. said…
I didn't even notice the F&H connection when I read this so now I'll have to read again. :)

And these fires are horrific. There are also the ones in So Cal and I've had friends evacuated there. After an entire summer of having to stay indoors due to smoke blowing in from BC, Oregon, and other parts of Washington, it's that much easier for my heart to go out to those indirectly affected. It doesn't help one's mood to have a sore throat and burning eyes every time you go outside. We had to buy a $20 super awesome filter for the a/c so that it didn't smell like smoke inside the house. But I can't even imagine what it's like for people who have lost everything. Just another horrific thing in this year, eh?
October 12, 2017 at 12:33 AM