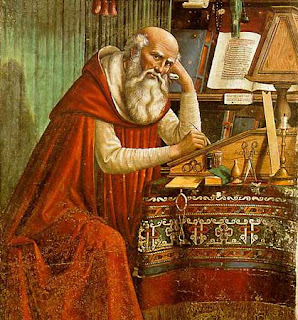 Hey, it's time for Something on Sunday, Jenny's meme where we share good things about the week because goodness knows we need it.

I had a humor grenade last night.  We were watching some of Ghostbusters, one of the greatest movies ever made, and you know at the beginning the librarian gets scared, and Venkman asks her if any of her relatives have mental problems.  Her answer: "My uncle thought he was St. Jerome."  I was laughing about that later on and my husband was not familiar with Jerome, so he looked him up.

Jerome is the patron saint of librarians.

I went to a free concert featuring a brass quintet and it was great!  Lovely music, including Bach, some modern stuff, some jazz, and all the songs of the five branches of the military.  Because it was an Air Force quintet, part of the Air Force Band of the Golden West, a fancy name if ever I heard one.

My daughter and I got all inspired about altered books and we each want to make one, so we're having a good time collecting papers and ribbons and oddments.  We can think of lots of good subjects, but focusing in on one topic is a bit of a problem.  She wants Gorey, and I'm thinking the seven planets.

Nicer than all these nice things, however, is that this week my husband started his new job, and he really likes it a lot.  His last couple of jobs have been stressful at best, so this is a very pleasant change.
#SomethingonSunday

Anonymous said…
Oo, congrats to your husband on the new job, that's exciting! And I can't wait to see pictures of the altered books you and your daughter come up with. I was actually just discussing that with my mum -- we were saying it seemed like a kind of craft we might actually be able to do, and we wanted to pick up some old crap books at next year's book fair to do some book-alteration experiments on them.
October 29, 2017 at 1:45 PM

Anonymous said…
I LOVE the original Ghostbusters. It is is hilarious!

Kristen M. said…
I haven't heard of altered books so now I need to go look that up!
And yes, many congrats to your husband ... and to you, because I know what it's like to be the spouse of a stressed-out worker!
October 30, 2017 at 11:28 PM