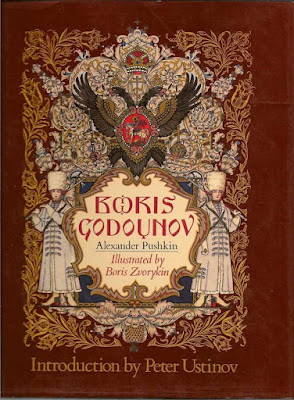 A year or so ago, I was browsing in the used bookstore and found this great edition of Boris Godounov by Pushkin, illustrated by Zvorykin.  But it was kind of on the pricey side, so I thought I might get it later...and then of course it wasn't there any more, and I regretted everything.  But!  Then I started this volunteer job sorting used books for the library, and the very first thing that happened was that the same book came across the table!  So I finally got to read it, and for free too.  It turns out to have a companion volume of fairy tales, so I'd like to get that as well.

Boris Godounov is a play written in blank verse, but I think more people are familiar with it in the Mussorgsky opera based upon the play.  (Comment and tell me!)  It's a historical play, and I had to learn some Russian history before I could make head or tail of the story.  The quick version: Ivan IV (the Terrible) murdered his son and heir in a fit of temper, which posed a massive problem of succession, because his second son was "feeble" -- he couldn't really reign.  Ivan made Boris Godounov and a couple other boyars into a regency council, but pretty soon Godounov was reigning as tsar all by himself.  Ivan had also left a tiny son, Dmitri, who was not officially legitimate or in line for the throne, but he died at the age of ten, and his mother accused Boris Godounov of having the boy assassinated.  (Official cause of death: he cut his own throat during a seizure.  So you can see where people might be skeptical.)  This history sets the scene for the play. 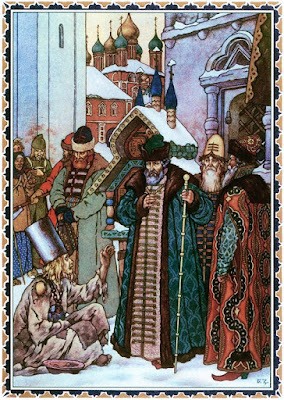 At the opening of the play, Russia has no tsar; the feeble and childless Feodor has died and there is no heir.  A ruler must be elected, and Boris Godounov is an obvious choice, but he is publicly reluctant until compelled to accept the crown.  Now Boris is tsar, his son Feodor is tsarevich, and surely all will be well.  And so it is, pretty much, until a disgruntled young monk decides that he'd make a pretty good Dmitri, coming out of hiding and now old enough to be the rightful tsar.  All of Godounov's reprisals, punishments, and fighting avail him little; he dies of a stroke, his heir is murdered, and Dmitri is crowned tsar.

This is all history too; Boris Godounov really was succeeded by an impostor Dmitri.  And then another one, and then it was all a big mess for a few years (the Time of Troubles) until the Romanovs got started.

This edition of the play is beautifully illustrated by Boris Zvorykin in a beautiful, very intricate style.  It's clearly influenced by Bilibin, though to me it seems more florid; I must admit that I prefer Bilibin, but it's still a lot of fun to look at.  Some of the illustrations, especially the portrait of Godounov, recall Russian icons and evoke their remote mood. 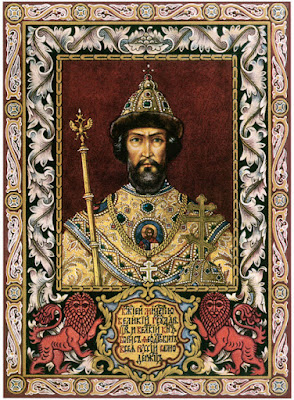 I sure do wish I could read Russian well.  It's very nice to read Pushkin in English, but it would be an awful lot better in the original.


Now that I've read this play and figured out a little bit of  the history, I'm hoping to tackle the history of the Romanovs that has been sitting on my shelf.  It's huge and intimidating.  The number of huge and intimidating books of Russian history on my shelf is getting a little out of control, though, so I really need to work on actually reading them!  (I also have The House of the Dead, The End of Tsarist Russia, and Gulag.  And one on the Cold War.)
drama poetry Russian literature

Marian H said…
Oh, I love those illustrations! This looks like a great edition of the story. I've read a few other things by Pushkin but not this one yet.
October 11, 2017 at 5:42 PM