By Jean - October 29, 2017
Laurie at Relevant Obscurity has a monthly event, Blogging the Spirit, where we talk a bit about things we don't normally discuss on book blogs.   I can think of two very different things this week:

There's a podcast I listen to about various churchy things and this week's episode actually featured a woman I knew in college, where she was doing a master's in theology (and was incidentally the best Sunday School teacher I've ever had).  Since then, we've crossed virtual paths through classical homeschooling and I've also seen some of her theological work, which specializes in Mark.    That's what she was talking about in the podcast, and I learned something I didn't know before: Mark was (as you might expect) originally an oral text, but it was performed.  It should be read more like a script than like a book, and more like a collection of short scripts, each gathered around a theme, than a chronological history. She suggests listening to Mark all in one go, so I'll include here a video.  There are a few on Youtube, and I picked this one because it seemed like more of a dramatic reading than the others.  She had a lot to say about the dramatic possibilities in the stories, and it was all just fascinating.

The disciples, for example, are portrayed as really pretty clueless -- they mess up all the time -- and in a dramatic scene would probably have gotten some laughs, but it also plays up the fact that Christ just keeps teaching them.  The message is that as long as you want to do this Christ-following thing, it doesn't matter that you can't do everything right and you mess up all the time, even if you do something as awful as Peter did.    In particular, she thinks the abrupt ending to Mark is meant to hand things off to the audience -- to ask, what are you going to do about this?

One other detail I thought was interesting is that Mark is written in pretty earthy language, and is even a bit awkward.  We miss that when we read, say, the KJV, which sounds kind of fancy to us.  When Jesus tells someone, "Hold your peace," in the original Greek it's more like "Shut up." 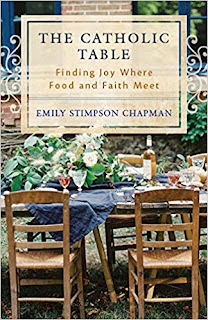 I've also been reading a Catholic book about food, which I'll review sometime soon.  It was pretty good and had some interesting insights into how food can be a part of spiritual practice.  Being Catholic, she's all about following the calendar of feasts and fasts -- I know almost nothing about the liturgical calendar, though I've always thought it to be a neat thing to do. But she uses that to talk about building a different, and healthier, relationship to food than the one we usually have, and also using food to practice virtue.  That means enjoying a dessert guilt-free at appropriate times, but also:


Every time we choose to abstain from meat on Friday and put a little extra money in the poor box instead, we grow in justice.  Every time we opt for water over soda, we grow just a little bit more prudent.  Every time we stick to our commitment to eat a nutritious salad for lunch our fortitude increases. And every time we eat just one cookie and leave the rest for later, we become more temperate.  The choices we make every day about food move us closer to (or farther away from) the virtuous life.   (The Catholic Table, by Emily Stimpson Chapman)

I'll talk more about it later, but it had a lot of good stuff in it.

Lory said…
The idea of reading or hearing the gospel of mark aloud in one go is intriguing! Maybe someday I'll set a couple of hours aside for that.

How I wish I had taken the chance to learn New Testament Greek in college...there are so many fascinating translation issues.
October 29, 2017 at 10:49 AM

Anonymous said…
Both of your selections are really great!

The oral tradition in Judaism is so strong, it only makes sense that the Apostles would have made that connection. Also, to hold an audience's interest there would have to be some liveliness in the preaching, I would think. I'll try to listen to this later. You have given me a lot to think about.