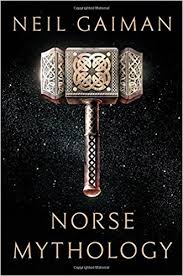 Everybody went nuts over this book last year, and I finally got to it too.

I like Neil Gaiman, and I like Norse mythology, so I expected good things, and I got them!  This is a very nice retelling of the Norse myths; it's clear, it's exciting, and it's beautifully written, with just a hint of Gaiman's personality, but not so much that it overshadows the material and becomes annoying.  I mean, this could have been "Neil Gaiman Tells His Own Version of Norse Myths"  -- which would be fine except that the cover doesn't say that -- and it's not.  So, good job Neil.

I don't have a lot more to say -- I just liked this book quite a bit.