By Jean - October 25, 2017
Since we're getting close to November, Brona has posted some fun warmup questions, which are guaranteed to make you feel more clueless than you thought you were.  Want to join in the party?  Go check out her post and write your answers! 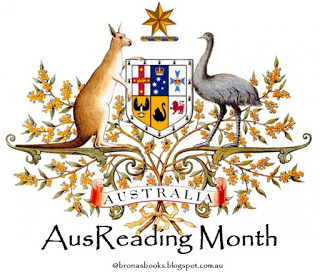 1. Tell us about the Australian books you've loved and read so far.
I really liked Seven Little Australians, except for the end. I enjoyed most of Picnic at Hanging Rock, and I loved My Brilliant Career.  I was blown away by The Biggest Estate on Earth, which is non-fiction.

2. When you think of Australia, what are the first five things that pop into your mind?
Kangaroos, Uluru, a lot of hot dry land, kookaburras, wildfires.... really being kind of a lot like California only with marsupials.

3. Have you ever visited Australia? Or thought about it?
What are the pro's and con's about travelling to/in Australia for you?
What are/were your impressions?
I would love to visit Australia!  As with all travel, what stops me is money.  If I were rich that's what I'd do -- travel all over the world.  Including Australia (and New Zealand too).

4. If you have been or plan to visit, where will you be heading first?
Hm, the Gold Coast?  Uluru?  The trouble with visiting Australia is, I live in a hot, dry climate already, and my idea of a great trip is to somewhere that isn't.  I tend to imagine the Gold Coast as being pretty much like Santa Barbara, but it probably has better snorkeling.  I'd like to go to Melbourne and Adelaide though.  (For one thing, Adelaide is the home of the greatest smocking and embroidery company in existence, and they have a store!)

5. Do you have a favourite Australian author/s or book/s?
Not yet, I don't think.  Working on it!

6. Which Aussie books are on your TBR pile/wishlist?
The Fortunes of Richard Mahony, by Henry Handel Richardson
A Descant for Gossips by Thea Astley
The Road From Coorain by Jill Ker Conway
Cloudstreet by Tim Winton
Dark Emu/Black Seeds, by Bruce Pascoe

7. Which book/s do you hope to read for #AusReadingMonth?
I have Cloudstreet and A Descant for Gossips.

8. It came to my attention recently (when I posted a snake photo on Instagram) that our overseas friends view Australia as a land full of big, bad, deadly animals.
Can you name five of them?
What about five of our cuter more unique creatures?
(For the locals, which five animals from each category have you had an up close and personal with)?
My impression is indeed that Australia teems with highly dangerous or venomous animals, although I also think of them as small (and thus harder to spot).  I think one is a kind of spider.  And there's gotta be a snake.  But it's true that the only ones I can actually name are Tasmanian devils, which are mean little critters but I don't know if they're actually dangerous to humans.

I can name lots of cute animals though.  Wallabies, possums (California opossums aren't cute at all, but Aussie ones are pretty adorable), those little kangaroos, I think they're called red, bilbies, and, well, koalas mostly seem to be cute from far away, but they're unique all right. And I learned a new one recently -- quolls!

9. Can you name our current Prime Minister (plus four more from memory)?
No googling allowed!
Oh gosh, I heard his name and that he was unpopular, but no I certainly cannot.  Jean Fail.  (On the other hand, Aussies can be happy and smug that their PM isn't notorious...)

10. Did you know that Australians have a weird thing for BIG statues of bizarre animals and things?  Can you name five of them?
You guys really are secret California twins, aren't you?
AusNovember Australian literature

Brona said…
I've just learnt some hing today too - biggest sticking & embroidery company in the world ?? I'll have to google that!

The ending of seven little Australians is very sad - one of the few books that makes me cry. But I've had a fear of big gum trees ever since.

I hadn't thought about how similar we might be to California - that's interesting. You have beautiful beaches & lots of bushfires & vineyards & deserts, so it makes sense. If you like a cold climate holiday you should consider adding Tasmania to your down under trip Wishlist.

Jean said…
It's called Country Bumpkin and is famous for lavish photography. LAVISH.

Of course I should go to Tasmania, brilliant! I had a Tasmanian friend, even. Her address was in West Hobart and for years I thought Hobart must be a big city to have a West, but in fact it's about half the size of my town...
October 26, 2017 at 6:04 AM

Kerry said…
I'd forgotten Country Bumpkin until you mentioned it. They publish Inspirations magazine, don't they? I have an issue with a wonderful pattern of Aussie and NZ birds that I hope to get to stitch one day. (I'm not an Aussie, but a Kiwi who lived in Melbourne for a number of years as a teenager.) If you're less I in the "hot" things, you'd probably like places in lower NSW, Victoria and eastern SA, as well as Tasmania.
October 26, 2017 at 8:36 PM

Kerry said…
P.S. Talking of Aussie stitching, the thing at the top of my wishlist right now is Aussie Christmas lunch by Smee Designs (www.smeedesigns.com). She has some lovely fun things on her site.
October 26, 2017 at 8:39 PM

Brona said…
Ahhh, I'm a cross-stitcher which is why I haven't come across this site before - but I've always been intrigued by embroidery.

I've yet to go to Tassie myself, but I'm not a big fan of the cold! We would like to catch the ferry across then drive around the state one summer...maybe in the next few years. None of our cities are as big as American or European ones - although Sydney is trying hard to catch up!
October 29, 2017 at 3:26 AM