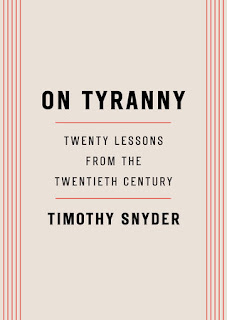 On Tyranny: Twenty Lessons From the Twentieth Century, by Timothy Snyder

A couple of years ago, I read Timothy Snyder's excellent account of Eastern Europe in the 20th century, Bloodlands.  It was a fantastic book, though one of the grimmest I've ever read.  But Snyder knows what he's talking about, and so when he writes a little teeny book about tyranny that takes its lessons from his historical knowledge, I think it's a good idea to read it.

I do mean it's teeny.  This is not a scholarly or heavy work; it's more like a short tutorial for Americans.  It has 20 sections, each just a few pages long, illustrating a rule: 1) Do not obey in advance.  3) Beware the one-party state.  5) Remember professional ethics.  12) Make eye contact and small talk.  14) Establish a private life.  19) Be a patriot.

As such, it's a pretty quick read and one that most people can read with interest.  Most of the examples are taken from World War II, so they're accessible and not hard to understand.  This is a book for everybody.  So go read it!

To Ukrainians, Americans seemed comically slow to react to the obvious threats of cyberwar and fake news.

The most intelligent of the Nazis, the legal theorist Cark Schmitt, explained in clear language the essence of fascist governance.  The way to destroy all rules, he explained, was to focus on the idea of the exception.  A Nazi leader outmaneuvers his opponents by manufacturing a general conviction that the present moment is exceptional, and then transforming that state of exception into a permanent emergency.  Citizens then trade real freedom for fake safety.

[On Americans' recent assumption that liberal democracy is inevitable and cannot be changed, and some critics' talk of need for a disruption]: When applied to politics, it again carries the implication that nothing can really change, that the chaos that excites us will eventually be absorbed by a self-regulating system.  The man who runs naked across a football field certainly disrupts, but he does not change the rules of the game.   The whole notion of disruption is adolescent.  It assumed that after the teenagers make a mess, the adults will come and clean it up.  But there are no adults.  We own this mess. 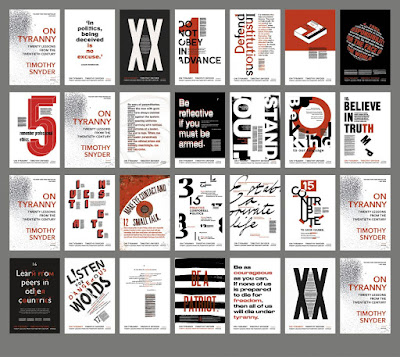 I finished this book the other evening, and we had just finished watching a couple of episodes of Babylon 5, which we've been watching as a family since the summer.  (Actually, since school started, it's been too busy to allow us to watch very often at all, so we grabbed this chance.)  We're at the start of the third year, and Earth's government is taking a scary turn into totalitarianism.  The series isn't subtle about this at all and the episode we'd watched had featured a political officer throwing around words like emergency, special circumstance, sedition, and ideological purity.  At the same time, my daughter had snitched the book on the eugenics movement in America that I had ILLed and was reading aloud bits to me.  All three of these things contained serious warnings about the dangers of arrogance, apathy, and tyranny.  I guess the universe wants me to get a message...


books everyone should read history politics