By Jean - November 07, 2014
I have so enjoyed Lory's Witch Week event!  Every day there was a new post with a great discussion of a DWJ book, and there was a giveaway (which I won, whee!) and we had a readalong of Witch Week. So, onward to the book:

The pupils at Larwood House boarding school are troubled students, many of them witch orphans.  Nan is a social outcast even in this bunch, and so is Charles.  But their tedious and unhappy lives actually get dangerous when an accusation surfaces that someone in the class is a witch.  Pretty soon it becomes obvious that indeed there is witchcraft about, and while it's funny--and Nan and Charles are starting to hope for something--in this world, witches are hunted and burned.  How can they escape? 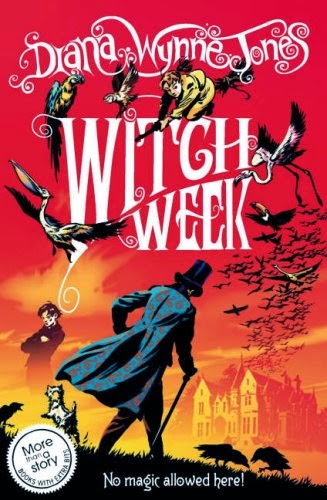 Witch Week is a really odd book, because on the surface, it's hilarious.  My 11-year-old read it with glee.  It is funny; all these ridiculous things happen and there is total mayhem.  At the same time, this is a story involving a lot of vicious bullying in a school that is dismal at best, and a background world which is exactly like our own (around 1980), except that inborn magical talent is both extremely common and also punished by death--on a bonfire. It's the non-magical world that functions as an escape route, inverting the usual trope of a kid with a rotten life or a problem escaping into a fantastic land of magic.

This is a Chrestomanci book--in fact it's the first Chrestomanci book I ever read, so I was confused for years until I found some others--but he doesn't play a large part.  He is certainly very effective during his short time onstage, though; here we see him at work, doing his job as it must usually happen, without the entire castle and family tagging along as well.

I think I like this cover better than most.  Usually it has an illustration of Nan wrapped in a pink blanket on a broomstick, which is a memorable scene but not, to my mind, the best for a cover image.  I like the birds, and the silhouette of Chrestomanci.

If you're new to the Chrestomanci universe, this is not the best book to start with, but it is a great read--and it's really funny.


A side note: I have never thought of anyone who I thought could play Chrestomanci well, but it just occurred to me that maybe Tom Hiddleston would be a good fit.  I'm not one to swoon over him but I do think he's got the look and that he could do the manner.  Thoughts?
DWJ Month SF/fantasy YA lit