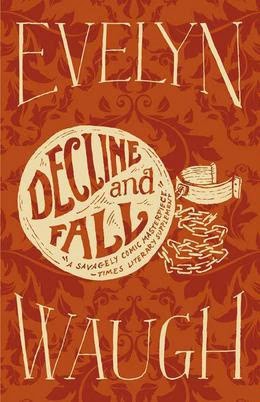 Decline and Fall, by Evelyn Waugh

The only book I've read by Evelyn Waugh is Brideshead Revisited, which is mostly on the melancholy side, so I thought I would try a funny one.  Decline and Fall is Waugh's first novel.

Paul Pennyfeather is a divinity student at Oxford, the most innocent fellow around, but through an unfortunate mishap he is sent down (expelled) for indecent behavior.  He is fit for nothing but to become a minor schoolmaster at a not-very-good school, so off he goes to Wales to meet a cast of oddballs.  Fate tosses him hither and thither, between wealthy socialites and, well, prison.  Most of it is funny, some of it is pretty strange in that 1920s way, and a few bits defy the comedy and go melancholy again.

I enjoyed it, but not like I enjoy a Wodehouse novel, which is more straightforward fun.  Waugh seems to have a layer of gray under his humor, like he's showing us that things might be funny on the surface, but watch out for those depths.  There's quite a bit of anger in there too, and he really sticks his knife into British institutions.