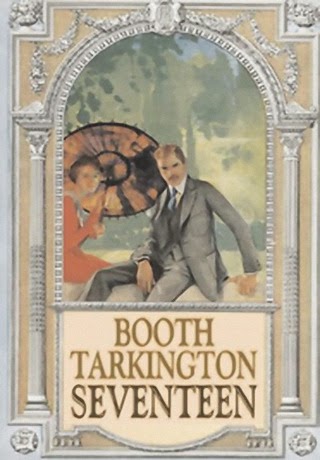 I found the Booth Tarkington section at the library, and I took out The Magnificent Ambersons and this Seventeen, which just looked fun.

It's summer in small-town Middle America in about 1914, William Baxter is 17--and there's a pretty girl visiting her friend for the summer.  For the whole summer, we travel with William as he (and a couple of friends) pays court to Miss Pratt.  William is alternately daydreamily romantic, self-important, chagrined, or hideously embarrassed and angry when things don't go his way.  It's a funny and realistic story, and we both sympathize with, and laugh at, William (and several other characters too).

The story is really funny, and I enjoyed a lot of it.  William is selfish and self-dramatizing, and young.  The girl he is in love with is hilariously affected; she is very pretty, but she also likes to speak in a playful baby-talk--often to her spoiled little lapdog Flopit--that would make anyone not infatuated with her want to strangle her after about 2 minutes.  Which is certainly what her long-suffering host rather wishes he could do!  William's little sister is also a fun character in her own right.

There are some other points about the story that are a bit hard to take.  Genesis, a local black handyman, is a constant minor character and William doesn't treat him well.  It's interesting to note that William is being selfish and awful at those times. Tarkington himself doesn't seem as bad as William; Genesis is a somewhat real person with his own ideas.  He's not stupid or craven, but he does speak in a strong accent.

This story takes place in the summer of 1914, but never a whisper is heard about the start of World War I.  I think that's probably quite realistic.  It's a small town and William could not care less about international politics at this point, but in a few years he will think differently.  Tarkington wrote the story in 1915 and 1916, so the US had not entered the war yet and was happy not to be involved.
American literature YA lit